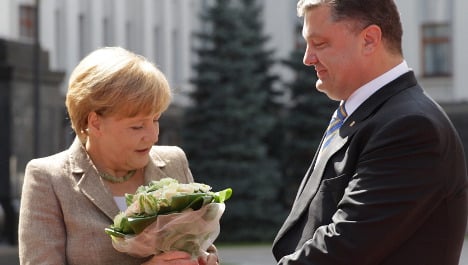 Her remarks came a day after she paid a highly symbolic visit to Kiev just ahead of crunch talks between Ukrainian President Petro Poroshenko and Russian President Vladimir Putin alongside top EU officials on Tuesday.
Merkel welcomed the scheduled talks in Minsk, but cautioned they would probably not bring any "decisive breakthrough".
"There must be dialogue. There can only be a political solution. There won't be a military solution to this conflict," she said.
Merkel said Ukrainians must be allowed to choose their own fate, in the same way Germans did after unification in 1990.
On Saturday, her vice chancellor Sigmar Gabriel had suggested that establishing a federal Ukraine was the only viable solution to the crisis pitting Kiev against pro-Russian separatists.
Merkel said that if Ukraine opted to rejoin the Eurasian Union with Belarus, Kazakhstan and Russia, then Europe would not make "a huge conflict" out of it.
She said Europe also wanted "sensible relations" with Moscow.
Asked about German plans to deliver weapons to Kurds fighting against Islamic State militants in the north of Iraq – to be debated in the lower house of parliament, or Bundestag, on September 1st – Merkel categorically ruled out sending German troops.
SEE ALSO: Crimea annexation unnerves Germans