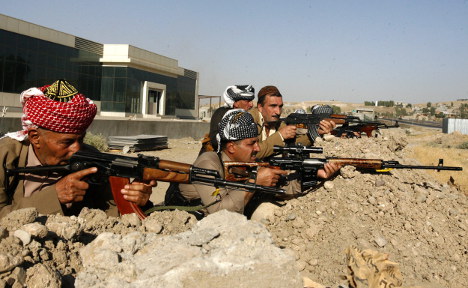 Foreign Minister Frank-Walter Steinmeier reaffirmed his commitment to increasing Germany's role in the world's conflict zones at the annual conference of German ambassadors in Berlin on Monday.

"We need the courage and willingness to intervene," said Steinmeier amid national debate on whether Germany should send weapons to Kurdish forces resisting the rise of the Islamic State (ISIS) in northern Iraq.

"We cannot leave the Kurds alone with only food. That won't be enough," Steinmeier said.

But while no-one doubts German economic capacity and the political clout that goes with it, her hard power might not be up to politicians' expectations.

Germany is the world's second arms exporter, selling almost 6 billion euros' worth of weapons to foreign buyers in 2013. But its own military is struggling to maintain its equipment for lack of funding.

Der Spiegel reported over the weekend on an internal army report showing that just 21 of Germany's 56 Transall transport aircraft are fit to fly, casting doubt over the Bundeswehr's ability to deliver vital supplies to Kurdish forces fighting Isis in northern Iraq.

It emerged last week that Germany could not supply the night vision equipment and protective vests it had promised to Kurdish Peshmerga fighters, lacking enough of the optics and finding the vests had deteriorated to the point of uselessness in storage.

Germany's contribution to the fight was reduced to providing rations for the beleaguered Kurds. A flight on Friday sent beef sausages, burgers, biscuits, granola bars and medical supplies to the Kurdish regional capital Erbil. Steinmeier was, however, careful not to send mixed messages ahead of a decision by Germany's parliament about whether to send more than non-lethal aid to northern Iraq.

"I do not advocate military adventures," said Steinmeier.

Since early this year, Steinmeier has been pushing for Germany to take on greater responsibility in dealing with global conflicts. "Some think we are a happy isolated island in a stormy ocean. I think it's an illusion," said the foreign minister on Monday.

He admitted, however, that German public opinion has been strongly opposed to military intervention. "There is a huge gap between what other [countries] want and what Germans are willing to do," said Steinmeier in tacit acknowledgement of US pressure for Germany to take a stronger role in the Middle East.

"I cannot stand still and accept this. We need to close this gap of understanding."

While Merkel has until now shut down any discussion of increased defence spending, politicians from her own camp demanded that the German military machine be brought back into top condition.

CSU leader Horst Seehofer told Der Spiegel that “there just isn't enough money there for the army to fulfil its duties,” saying that he wanted to bring military procurement onto the agenda in the German Parliament.

And CSU defence expert Florian Hahn estimated that seven billion euros of investment were needed just to stop the deterioration of the army's equipment.

However, much of its equipment is in dire need of repairs and currently unfit for use.

Just eight of its 109 Eurofighter aircraft are combat-ready and the majority of its transport helicopter fleet is grounded, according to the internal military report seen by Der Spiegel.

Even basic items like Mercedes-manufactured Unimog trucks are in many cases not in working condition.

By Tom Barfield and Tomas Urbina. Tomas Urbina is currently an Arthur F. Burns Fellow with The Local Germany.