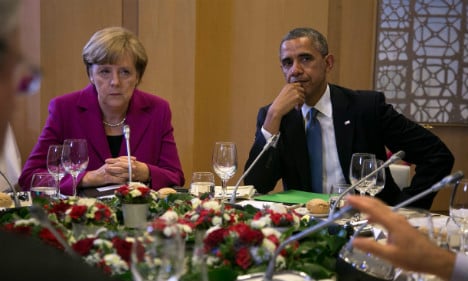 German Federal Chancellor Angela Merkel and US President Barack Obama during a meeting at the G7 Summit in July 2014. Photo: DPA

In a telephone call with Merkel, Obama said the conflict "has continued to deteriorate" since a Malaysian airliner was downed last month over rebel-held territory in Ukraine.

The West accuses Russian-backed separatists of shooting down the plane, while Moscow blames Ukraine.

Obama and Merkel "agreed that Russia sending a convoy into Ukraine without Ukraine's approval is a further provocation and a violation of Ukraine's sovereignty and territorial integrity," the White House said.

"They expressed concern that the large numbers of Russian troops on the border of Ukraine, the presence of Russian military personnel in Ukraine and Russian shelling of Ukrainian territory represent a dangerous escalation."

The statement was part of a Western rebuke of Russia for sending scores of trucks from a controversial aid convoy to east Ukraine's rebel-held Lugansk in a move Kiev decried as an "invasion."

Obama and Merkel "agreed that it is imperative that Russia remove its convoy from Ukrainian territory, accept the conditions previously agreed to with Ukraine and the International Red Cross for any humanitarian convoys in Ukraine and de-escalate the situation."

The pair urged Russia to remove its troops from the border region, withdraw weapons, vehicles and personnel from Ukrainian territory, and stop the flow of Russian personnel, military equipment and armored vehicles into eastern Ukraine.

"They also stressed the importance of a bilateral ceasefire accompanied by closure of the border and effective border monitoring," the White House added.

The European Union and the United States demanded that Russia immediately withdraw the convoy, amid fears the cargo could shore up pro-Moscow rebels fighting Kiev's forces.

Washington warned Russia it could face further sanctions, while the UN Security Council expressed concern that the move could lead to an escalation in the four-month conflict.

Some 280 trucks from the Russian convoy had been waiting at the border with Ukraine for a week as Moscow pressed for the aid to urgently be delivered to civilians in areas that have come under Ukrainian shelling.