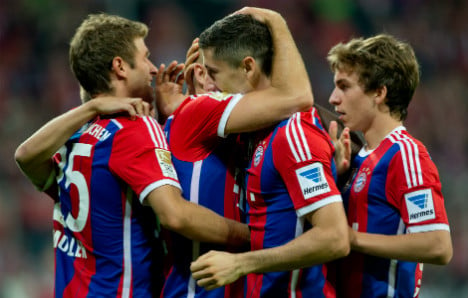 Pep Guardiola's side looked sluggish early on at the Allianz Arena but took the lead after 37 minutes when Thomas Müller poked home from Arjen Robben's cross.

The home side seemed in control when Robben scored just 67 seconds into the second half before a superb strike from Ivica Olic gave the visitors hope.

And Wolfsburg, who finished fifth last season, missed a glorious chance to steal a point when substitute Junior Malanda somehow missed from a yard out with 11 minutes remaining.

"We didn't have the ideal preparation," Robben said. "We had a lot of players at the World Cup until the end, who haven't trained much, and a lot of injuries.

"But that can't be used as an excuse. We have a super squad — the three points were the most important thing today."

The visitors, who finished fifth last season, left with plenty of regrets.

"To concede the second goal right at the start of the second half was tough," Olic said.

"But then we scored and after that I thought we played well. Kevin (De Bruyne) and Junior (Malanda) had really good chances and when you don't take your chances here, you won't get any points."

Gaudino lined up in central midfield alongside David Alaba, one of only three players who made their league debut for Bayern at a younger age.

After a slow start, Müller and Robben shot straight at visiting goalkeeper Max Grun, who was standing in for Wolfsburg captain Diego Benaglio.

Bayern thought they had made the breakthrough 28 minutes in when Robert Lewandowski tapped in from Robben's pass across goal but the Dutch winger was rightly flagged offside.

The home side were beginning to get on top and Lewandowski was denied again when Grun recovered well after fumbling Müller's close-range effort.

The Wolves keeper made an even better save moments later. Gaudino's clipped ball into the box was acrobatically steered towards goal by Lewandowksi, but Grun clawed the ball away from the top corner.

Wolfsburg were camped in their own half and an inevitable goal for Bayern arrived after 37 minutes. Robben turned Gustavo inside out down the right and his low ball across the face of goal was prodded home by Müller.

Bayern then made a blistering start to the second half when Robben dispossessed Guilavogui.

The home team broke at pace, with Müller and a deft touch from Lewandowski setting Robben free to tuck home from inside the box.

After 52 minutes, Wolfsburg pulled a goal back out of the blue. Olic got away from Holger Badstuber on the edge of the box before curling a first-time effort in off the underside of the bar.

Lewandowski failed to make the most of a good opening shortly afterwards and Bayern almost got punished towards the end.

Substitute Maximilian Arnold delivered a perfect left-wing cross to pick out Malanda, whose goalbound effort was deflected on to the bar by Manuel Neuer.

The rebound fell to Malanda, practically on the goal line, but the Belgian midfielder was taken by surprise and shinned the ball wide.

Bayern substitute Sebastian Rode had a goal ruled off for offside and Robben hit the bar late on as the two-time defending champions finished strongly.