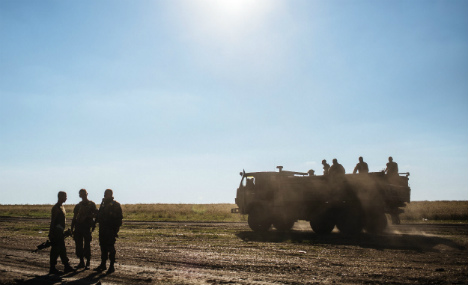 Around 60 percent of respondents said they worried that the crisis will lead to a direct military confrontation between Russia and its former Soviet satellite, according to the Politbarometer survey by public broadcaster ZDF.

Of the more than 1,200 people polled this week, 64 percent believed Russia would seize more territory in eastern Ukraine following the annexation of the Crimea peninsula in March.

The proportion of respondents voicing "great concern" over the policies of Russian President Vladimir Putin rose to 69 percent from 61 percent in May.

Fighting in eastern Ukraine over the past four months has cost some 2,200 lives, with Ukrainian forces advancing against pro-Moscow separatist rebels in the east.

Ukraine on Friday accused Moscow of staging a "direct invasion" after Russia sent part of a mammoth aid convoy into eastern Ukraine.

Merkel is due to travel to Kiev Saturday for the first time since the start of the crisis for talks with Ukrainian President Petro Poroshenko, who is then set to meet Putin on Tuesday in Minsk.