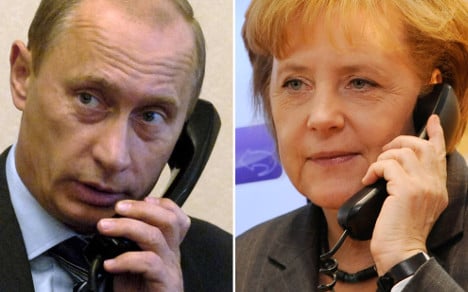 Call me maybe: The Berlin-Moscow hot-line has been busy. Photo: DPA
The two have enjoyed a strong and steady working relationship in recent years, in large part due to Putin's fluent German and past ties with the former East Germany (albeit while working for the KGB).
But since the Russian leader has sunk into international isolation with his country's annexation of Crimea and its support for rebels in eastern Ukraine, the Chancellor beats out all others in having his ear, Die Welt newspaper reported Thursday.
Of the 120 calls Putin has had with world leaders since the start of the year, 33 were with Merkel, more than twice the amount of the nearest other leader eager to discuss Ukraine and other crises with him.
In second spot is France's François Hollande, with 15 calls.
The frequency of the calls reflects the urgency of the times. According to the Kremlin, only 59 calls were made last year in the same period.
But lest the numbers paint a picture of a leader desperate for someone to talk to, the paper notes that it's far more often a case of other leaders trying to reach Putin, rather than him calling them.
Calls are often not taken by the Kremlin chief, with aides citing his unavailability. It could be, of course, that he just doesn't want to talk to them.
Another key distinction is whether the call is conducted one-on-one (with the exception of interpreters) with a leader, or taken as a conference call, hosted by one leader but including others too.
A total of 21 out of 33 calls with Merkel were in the bilateral format.
But nine of Hollande's 15 calls with the Russian leader were in a group format, which is interpreted more as rendering an intermediary service for the world community.
By contrast, Putin and US President Barack Obama held 10 bilateral calls this year.
Who ya gonna call?
The peak of the hot-line calls came in March, when the Crimea snatch took place and first sanctions were announced against Russia, with Putin fielding 25 calls, including several from the Chancellor.
Another 24 took place in July, when a missile strike that many countries have blamed on Russia downed the Malaysia Airlines flight MH17, killing all 298 people on board.
As for the content of the calls and who led the conversation, information varies depending on which side tells the world about it.
In Merkel's last conversations with Putin, held on August 16 and 6, she focused on Germany's demand that Russia cease supplying weapons and armed personnel to separatists in eastern Ukraine, a German government spokesman said.
But the Kremlin said this was not a topic of either phone call. In the first, they claim that Putin rather informed Merkel about Russian humanitarian aid deliveries to the conflict zone (which critics claim were a cover for weapons supplies).
And during the second he squarely blamed the government in Kiev for the events in eastern Ukraine, Moscow adds.
Among other world leaders, Britain's David Cameron spoke six times with Putin this year.
This was the same amount as Ukraine's President Petro Poroschenko, and one call less than Putin held with his ex-Soviet neighbour Alexander Lukashenko in Belarus.