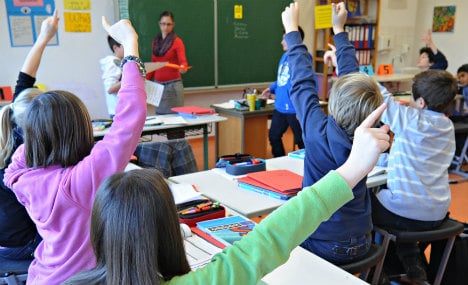 The Education Monitor 2014 was released on Tuesday, giving top marks to Saxony's schools, Initiative Neue Soziale Marktwirtschaft (INSM) said in its release. The study was done for the INSM by the Cologne Institute for Economic Research (IW).

"Saxony has excellent support infrastructure, and it impresses with its high-quality schools and it's also successfully avoiding educational deficiencies," the report stated.

"The highest priority of an education system should be that everyone benefits from it," said Hubertus Pellenger, CEO at the INSM.

Thuringia, Bavaria, Baden-Württemberg and Hamburg rounded out the top five.

The worst grades went to Brandenburg, Nordrhein-Westphalia (NRW) and Berlin. Those that were at the bottom were there for different reasons. The NRW's weak points were large class sizes, poor school infrastructure and a lack of prevention in the area of education deficiencies. The IW criticized Brandenburg for not doing enough integration work while Berlin, though it has small class sizes, the students see too much time wasted in the classroom.

The IW noted that even in the lower ranked schoolings, there were high points to be seen. Berlin led the country in research and the NRW was was leading in integration.

Saarland and Bavaria were most improved.

However, to improve all classrooms, the INSM advocates for a country-wide switch to 12 years of school and more support for second career plans, keeping older people in the workforce longer.

The 2014 study took into account 93 indicators of educational success, including condition of the infrastructure, class sizes, drop-out rates and school population demographics.