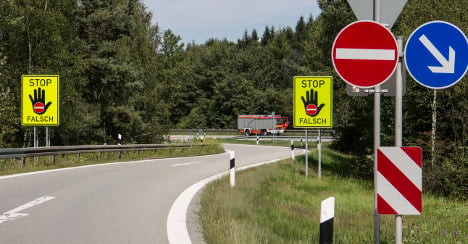 Mairleitner heard police warnings about a car driving the wrong way near Passau over his radio after several motorists phoned 112 to alert the authorities.

He decided to move his truck into the left-hand lane and co-ordinated with another truck driver in the right-hand lane by radio to slow down the traffic behind them.

The pair kept in touch with other truckers, who used their lights to warn traffic heading in the direction of the erratic driver.

After just a few minutes Mairleitner spotted the misguided senior standing by the central barrier, convinced him to turn around and escorted him off at the Pocking exit, meeting with a police patrol on the way.

The 82-year-old man was driving a Renault with Austrian numberplates, the lower Bavaria police headquarters said in a statement.

A spokeswoman for Mairleitner's employer, Zeller Transporte GmbH, told The Local that the firm was "very proud" of him. The A3 near Pocking was the site of an accident that killed three people just ten days before, caused by a 79-year-old driving the wrong way.

The two incidents happened despite specially-installed signs at the exit designed to warn drivers who might be heading in the wrong direction.

Wrong-way drivers, or "ghost drivers" as they are known in German, are a nationwide problem, with 2,200 incidents last year resulting in 22 deaths.