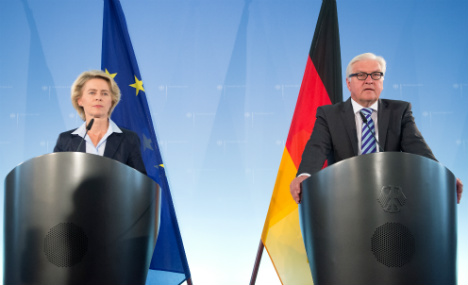 After other European countries said they would send weapons to help theembattled Kurdish forces in northern Iraq, "we are ready to do the same," Steinmeier said at a joint press conference with Defence Minister Ursula von der Leyen.

He called the onslaught of the IS "barbaric", the suffering of refugees"unimaginable", and warned that the sweeping advance of the radicals spells an "existential threat" to Iraq and threatens a regional "conflagration".

The ministers said Germany would first send more humanitarian aid and non-lethal equipment such as helmets, night-vision goggles and explosives detectors while it checked what weapons shipments would make sense, in coordination with EU partners.

Von der Leyen said "the breathtaking speed and incredible brutality" of the militant group had "triggered a humanitarian catastrophe" and, using its former name, said that "ISIS must be stopped".

Sending military hardware is unusual for Germany which, burdened by its past aggression in two world wars, shies from foreign military engagements and as a rule does not export weapons into live conflict zones.

Critics oppose the idea of sending weapons to a war zone where fighters and arms can quickly change sides.

Alarming images of Iraqi minorities, including Christians and Yazidis,under siege by jihadists have struck a chord in European capitals, and the radicals' apparent beheading of a US journalist has further stoked outrage.

Last Friday EU ministers agreed at an emergency meeting to back the armingof overwhelmed Iraqi Kurdish fighters. France has already begun to provide weapons, and Britain said it was ready to do so.

Chancellor Angela Merkel last week signalled she may shift her stance froma flat refusal when she told a local newspaper that the crimes of IS militants were "appalling" and the task of halting their advance was up to "the entire international community".

The change of position is politically difficult in Germany, where recentpolls have shown more than 70 percent of respondents reject the idea of German arms shipments to Iraq.