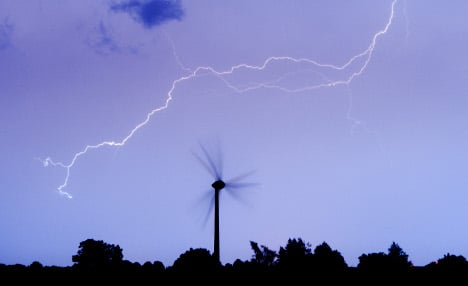 Lightning illuminates the sky above a wind turbine. Photo: DPA

In a study reported by the Süddeutsche Zeitung on Wednesday, the auditors note that the federal government has “no sufficient overview of the financial effects of the energy transition” over the coming years.

They expect the costs of the policies to reach tens of billions each year, although that figure includes subsidies for building modernisations and research.

Much of the waste comes from the poor division of responsibilities among ministries.

They found that between the federal government and the states, there are 24 separate bodies charged with over-seeing the energy transition, “making a coordinated and effective approach more difficult.”

These bodies often failed to measure the effectiveness of policies after they were implemented, with many not known to be either a success or a failure.

But the Ministries for the Environment and the Economy parceled out the different policy areas between them. By shutting out the four other ministries originally supposed to be involved, they missed out on expertise that could have led to more accurate cost projections.

The Fukushima nuclear disaster in Japan in early 2011 prompted a fresh rethink of German energy policy, with Merkel ultimately announcing that Germany would phase out nuclear power, but this too was poorly planned.

Four ministries commissioned unrelated studies into the energy transition in the same year, illustrating the lack of oversight by the federal government of its own activity, the auditors said.

"The BRH examined the organisation and financing of the energy transition in the 17th legislature," Federal Ministry for the Economy (BWMi) spokeswoman Julia Modes told The Local in an emailed statement.

"Combining all the responsibilities for energy policy in the BMWi in the 18th legislature has created the conditions to achieve the organisational and process optimisations the BRH suggests." The ministry has also introduced a monitoring process with the aim of targeting waste and making sure objectives are met.

The BRH had used a very broad definition of costs related to the energy transition in its report, encompassing all government measures relating to energy, Modes added.

"A total economic, social and environmental evaluation has to be made and priorities set," rather than a simple addition of expenditures or reductions in tax income, she said.