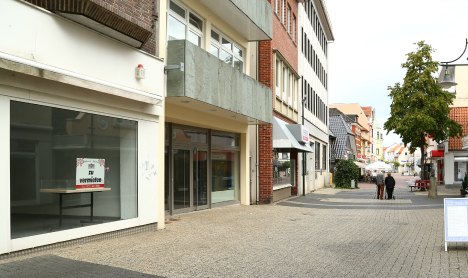 It's 2 p.m. on a Saturday afternoon and the downtown promenades in Delmenhorst, built for the bustle of pedestrian city life, are mostly deserted. A trail of signs in empty glass storefronts leads visitors through the main drag, calling out in muted desperation: "To Let."

It wasn't always like this, says 65-year-old Ewald Bieler, a civil engineer who retired last year after a career working for this northwestern Germany municipality with some 74,000 inhabitants.

"Delmenhorst was a very vibrant town with all kinds of stores 30 years ago," he says. "There were five cinemas and several bars and discos for the young people."

Today, the economic rot is at city hall's doorstep. Across the square from the Rathaus, a bright green shoe store advertises its unbeatable sales in the window. The shop will close at the end of August, replacing its sale signs with the dreaded "for rent."

Employees were barred by the store's owner from speaking about the closure, but said the business had been open for 2.5 years. Now the shoe shop will join at least 24 other empty storefronts.

Delmenhorst is just one of hundreds of victims of what Professor Gerrit Heinemann calls the "erosion" of small town centres.

Big box stores on their outskirts, online shops and the proximity of larger, better serviced cities have all eaten away at the share of the retail market available to businesses that once thrived in smaller towns, says the expert in trade and retail at Niederrhein University.

In Delmenhorst, it's a perfect storm. The retiree Bieler has watched big retail chains like Kik and Kaufland set up and thrive on the outskirts. And he's seen how people gravitated more and more towards Bremen, a city of nearly 550,000 people only a few kilometres away, seeking jobs and commerce.

"The loss of jobs here has cut down the purchasing power of citizens," says Bieler, which immediately impacts on local trade.

The unemployment rate in Delmenhorst has hovered around 10.5 percent for the last three years, significantly higher than the current national rate of 6.6 percent. The town was also once a hub for the local textiles industry, making clothing that was known across Germany.

Still, Germany's small cities and towns are home to two-thirds of the country's population and account for more than half of its retail sales market. Though the trend is toward more online sales, the potential for recovery is there, says Heinemann. But shops first have to reinvent themselves and look for new sources of revenue, especially on the web.

Unemployed at 52, successful business owner at 54

The dismal downturn has fired up some locals, however.

Sabine Jünemann was 52 when her employer, a family-owned bookstore named Ruppert, decided to cut its losses and close in 2012 after more than half a century in business on Delmenhorst's main pedestrian promenade.

"I tried to look for another job with a bookstore and some of the stores said I should try to open my own," says Jünemann.

She had been out of work 12 years earlier and even then it was difficult to find a new job. This time, she took the plunge. Two months after Ruppert closed, Jünemann opened her own bookstore in the centre of Delmenhorst with two employees, a few doors down from the vacant Ruppert storefront. Now, two years later, she says business is "wonderful".

But it hasn't been easy. "I've had to put off any thought of vacation time and give up things that are important for me," says Jünemann. "You really have to stick behind your idea and be brave."

One of her key ideas was to set up a website with an online shop. Competition is stiff, not only from the bookstore down the street, but from online giants like Amazon. With her web shop, her customers can buy books online directly from her supplier and have them delivered at home or to the store.

Jünemann is also proud of her engagement with the community. Her store hosts regular events that bring in 40-50 people. "The best question I get is, 'When is the next one?'," she says.

Like Bieler, Jünemann has witnessed the gradual hollowing out of the town centre. Both agree that one recent factor may have changed things decisively. In 2004, the large Karstadt department store closed and the Hertie chain that took over the space only lasted until 2009.

"It was a magnet for people," says Jünemann. In a silent testament to the loss of custom, a hulking, concrete, multi-story building lies vacant across the street from her shop, more of an eyesore than anything else.

"You could see at that time that more and more small shops were closing," says Jünemann.

"Something can be done"

It's tough for even a department store to compete with online retailers like Amazon, says Heinemann. "They have so many more products available at lower prices and offer the convenience of home delivery," he says. "Amazon has spoiled consumers."

But the retail expert insists the downward spiral in Germany's small city centres can be reversed.

"Something can still be done about it," says Heinemann, who believes communities and businesses have a dual role to play. "Towns need to stop letting big box shops locate on the outskirts. They can take over properties that are vacant and create incentives to bring businesses back to the centre."

It's not all about selling things, though. "Getting people into the centre more often is what matters, so towns need to create other reasons for them to go there," he adds.

Delmenhorst, however, isn't sitting on its hands. Municipal authorities are actively searching for a city manager, which Heinemann says is essential because a town is much like "a shopping mall that has parking, shops, restaurants and leisure spaces."

Excavators are already digging up one of the quaint shopping streets leading from the train station for improvements to aging underground infrastructure.

Ewald Bieler, for one, sees this as a sign of hope, and says its the kind of hands-on work he would have run when he worked with the town during its shopping heyday.

He also believes the newly elected mayor can make a difference, and that there's one key starting criteria for a turnaround in Delmenhorst's fortunes: "The town authorities have to have the courage to make crucial decisions."