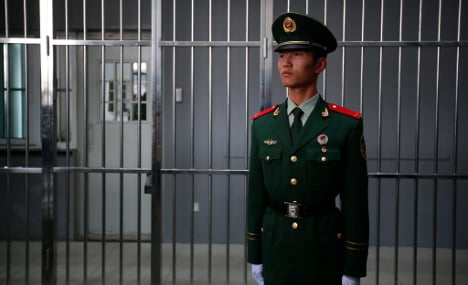 A court in Xiamen three years ago found the 36-year-old from Bavaria guilty of the double homicide committed in the southeastern port city in 2010.

But the sentence for the crime was only handed down by an intermediate people's court on Tuesday, the man's lawyer told the dpa news agency in Beijing.

It must now be confirmed by a higher court and finally by China's Supreme Court. If enforced, this would be the first execution of a German national by the modern Chinese state.

The man, who comes from Teisendorf in northern Bavaria, used a hammer and a knife to kill his Venezuelan former girlfriend from his student days in Munich, as well as her German current partner.

The premeditated attack took place on the street in Xiamen, and was motivated by jealousy, his legal counsel said.

But it was still unclear if an appeal will be lodged by his client, who is in contact with German diplomats in the city.

"We don't know yet," lawyer Chen Liqun told dpa. "He has not come to a decision himself."

Victims lured to their deaths

The killer and his former partner studied sinology together in Munich before they broke up in 2005. The man was unable to accept their separation and began to stalk the woman, who finally informed the police, friends said.

She went to Xiamen to study in 2006, and it is speculated that the man later followed her there with the intention of killing the woman and her new partner.

He reportedly lured both victims to a luxury hotel, where witnesses said he waited for them on the street, disguised in black worker's clothing, before attacking them with the tools.

The woman is said to have fallen to her knees begging for mercy before her death.

Her murderer tried to kill himself after slaying the couple, but survived serious injuries.

The male victim leaves behind a six-year-old child who is now being cared for by his family in Germany.

It was also not clear if the sentence would be carried out if confirmed. The German Foreign Office routinely tries to ensure that death sentences passed on German citizens are commuted to jail time.

But if the man does not appeal successfully, the execution will go ahead automatically.

As in previous appealed cases, China may commute the death sentence to lifelong imprisonment, although this would be unusual in a murder case.

The last state execution of a European was in 2009, when China executed a Pakistan-born British citizen for drug-trafficking.