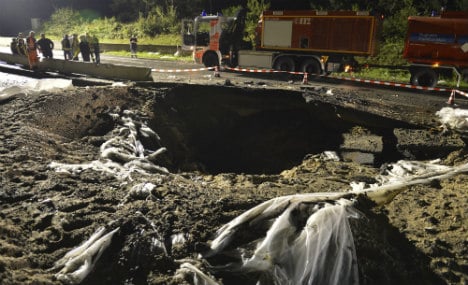 Traffic was jammed up as deep as 20 kilometres on the Autobahn 3 around Offenbach, a suburb of Frankfurt, on Wednesday morning, according to the Rheinisches Post.

Police are encouraging commuters to take the train.

It is unclear when the road will be open again, though the motorway is open in the direction to Frankfurt.

Detonation crews had originally tried to chemically defuse the bomb. When that didn't work, they had to do the controlled detonation, leaving a two- to three-metre-deep hole in the road.

The unexploded British bomb was found under the flight path to Frankfurt Airport, necessitating the closure of the southern runway as well. Flights were delayed until the blast had been triggered.

As a result, 22 planes were allowed to take off after the 11:00 pm night-flight ban on Tuesday night.

The bomb, which had a 300-metre blast radius, was discovered by a construction crew working on the Frankfurt Airport.

Officials closed down a 1,000-metre radius area around the site, evacuating around 160 people from their homes in the southern end of Offenbach and closing the motorway in both directions.