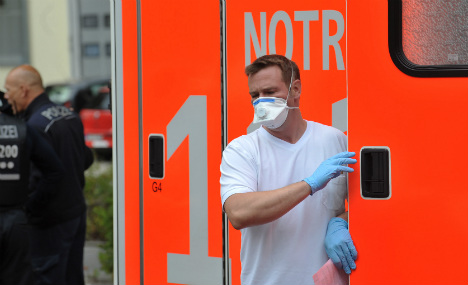 A doctor at the Job Centre in Berlin. Photo:DPA

The emergency services cordoned off the premises in the city's northeastern Prenzlauer Berg district after the 30-year-old collapsed. The woman then told medics she had had contact with victims of the deadly disease in her homeland.

She was immediately taken for hospital testing along with several other people who had been with her in the building.

However, doctors said that Ebola was unlikely and that the woman was probably suffering from an acute stomach bug.

"The patient has not been in an affected region," Berlin's Charite hospital said in a statement. "The doctors assume an infectious gastrointestinal disease."

Further tests were being carried out, but experts "at the present time do not assume that it is Ebola".

An initial assessment had determined symptoms typical of Ebola and paramedics put in place quarantine measures.

Police locked down the Job Centre for several hours until mid-afternoon while blood tests were carried out. The estimated 600 occupants were later allowed to leave.

Ebola can only be diagnosed through blood testing. Early symptoms of the disease include fever and circulation issues, similar to the common flu virus or other tropical diseases like malaria. It is transferred through bodily fluids like blood and mucus.

Two previous Ebola scares in Germany in recent days, in Hamburg and Frankfurt, ended with authorities sounding the all-clear.

West Africa's Ebola epidemic, which has hit four nations since it broke out in Guinea early this year, is the deadliest since the virus was discovered four decades ago in what is now the Democratic Republic of Congo.

A total of 1,229 people have died from Ebola in West Africa so far in 2014, according to the World Health Organization.

From The Local Spain: Spanish man tested for Ebola

From The Local Austria: Ebola scare as woman's body found in Tyrol