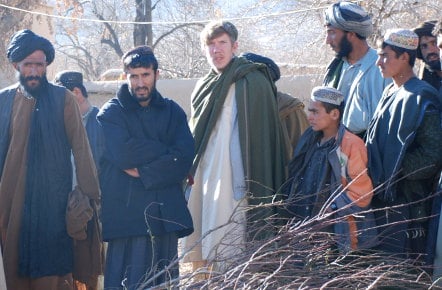 Matthias Kock spent several years learning the Afghan ropes. Photo: Matthias Kock
“How is it? Isn't it dangerous? What's going to happen when we're out?”
These are probably the top three questions that civilians and soldiers who worked in Afghanistan face at home. As easy it is to understand the curiosity, it's as hard to give a straight answer, even for 'veterans' with years of experience. Or maybe because of that.
The longer I stayed there, the more I realized there is one overarching attribute when you deal with this country: Ambivalence.
Alliances are the daily bread of political work in Afghanistan – from villages and tribes up to the presidential palace. And as we can see in Kabul's constant struggle, virtually all those alliances lack sustainability.
But no one ever gave me a proper explanation of the population's firm belief in the rightness of this short-lived and – in our western eyes – unstable socio-political system. Ambivalence again, a reality that can pendulum from one extreme to another before your eyes.
The way people relate to each other is equally baffling. Again, alliances are quickly forged and enemies as quickly made. You can never be 100 percent sure where you or others stand.
But there are also rules – unbreakable and centuries old – that even guarantee your worst enemy safety in your home. Also, personal friendship with Afghans is something that has profoundly changed me and almost all of my international colleagues.
It opens houses, families, relationships and most importantly, hearts and minds in a country so persistently torn apart by war.
And there's that contrast again: Even a society that has in one way or another been basically screwed over by foreign interventions for centuries can still be so heartfelt and friendly to foreigners.
Real-life film set
With all its political struggles, corruption, poverty, bombings, kidnappings, executions and all the other dire news we receive through the media, the situation in Afghanistan hardly seems something to be over-nostalgic about.
But it is precisely within all of this that you find yourself being most astonished.
After several years working in the country I was able to bring my closest friend from Germany to Kabul. He was immediately smitten by the place: “This is utterly different from what we hear at home!” he said.
And while I assisted in the shooting of 'Inbetween Worlds', a recently-released movie about a German army unit's relationship with an Afghan village, a large international film crew in the northern city of Mazar-e Sharif overcame their preconceptions in much the same way.
A further twist was how the crew and actors experienced the same difference of perception towards our reality and the Afghan reality, which is a core point of the film.
While they were accommodated behind the walls and razor wire of Camp Marmal by Mazar-e-Sharif, they happily worked outside this fortress by day, virtually unprotected among the population.
Maybe the misconceptions reflect as much on our western lifestyle as media portrayals. The mindset of a secure and saturated society tends to block the ability to understand Afghanistan and its people. The world in general is not really what we believe it to be – until we've been there. So how does the story of Germany's and the world's involvement in Afghanistan go now?
It still depends who you are talking to. Journalism about this country has been strongly influenced by personal preference or opinion about how things really are there.
One example is coverage of the German military, how it operated and what it achieved over the last 12 years. In reality, the people deployed there were saddled by myriad policy constraints as well as public sentiment at home that wanted to find them incompetent.
I read only very few accounts that appreciated the huge pressures of responsibility for the mission and the emphasis on not causing or sustaining casualties, material loss and generating bad publicity.
So, in the end, do not believe everything you hear about Afghanistan. Do not believe the foreign governments when they say the country is ready to stand on its own feet without foreign security forces. Do not believe journalists and opinion makers who say nothing went well here and that we achieved too little. But also know that they are not completely wrong.
Contradictory? Well, neither the armed conflict nor the Afghan executive branches and security services have stabilized to the extent that the international community can say job done, pack up and leave. Not by far. And much of the country is still a mess.
But more soldiers and more aid is no solution either. Flawed strategy and lack of will in some sectors of the international community would need to change at a stroke for that to bear a sudden windfall after all these years.
In Germany's case, the fear of casualties that hampered tangible achievement was one result of Berlin running this intervention against the will of much of its constituency.
That also prevented the soldiers and, to a large extent also, humanitarian and development organizations from working closely enough with Afghan partners to really make a difference.
No time for quitters
I now know firsthand that this is only possible through personal relationships. Partly because of Afghan culture, but most of all because of the Afghans' entrenched disbelief in imposed political systems.
But now that we are withdrawing and the threat of Taliban resurgence and reprisals grow, it is even more important that we do not forget about the Afghans. That we do not rush immediately to the next hot spot and allocate too much of our defence and development budgets there.
As the military boots march out of Afghanistan in 2014, now is the time to step up civilian ties. After spending so long there, we have invaluable contacts, knowledge and trust, at least in the North, where Germany mostly worked, and achieved not nothing, but many things that cannot be dismissed by the naysayers.
These include leaps in health care and education for both sexes, empowerment of women, infrastructure projects that nurture trade and local economies, soaring cell-phone usage that is also a tangible sign of a progressive and open society.
Then there are the personal relationships between Afghans and many thousands of foreigners, which have fostered a busy exchange of ideas and concepts, from obvious ones like girls' education or independent security capacity, to questions of public hygiene or national identity.
And it must still be possible to build on all of this, despite dwindling public interest at home. And to refrain from fig-leaf development work that serves appearance rather than effect.
But I still fear that is exactly what may happen. And after all the attention Afghanistan got since 2001, the lives lost and billions spent, I find that somewhat … ambivalent.
Matthias Kock, 34, worked around Afghanistan for five years from 2007-2013 on tribal and civilian relations, reconstruction and counter-narcotics with the German Army, the GIZ development organization and the Afghan government.