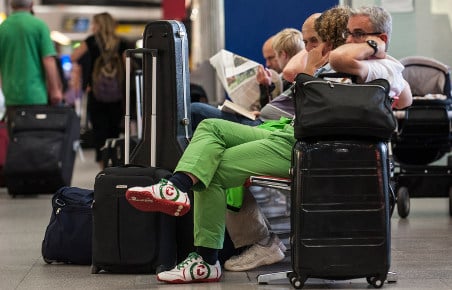 Passengers wait out a recent rainstorm at Berlin's Tegel airport. Photo: DPA
The figures relating to Germany's five largest airports and obtained by the Green Party from the Amsterdam-based company "EU-Claim", showed a 12-percent deterioration in flight reliability compared to 2012, Süddeutsche Zeitung newspaper reported.
A total of 28,115 flights with an estimated 4.8 million passengers were negatively affected last year, including delays of three hours or more.
Two million passengers were entitled to seek refunds, but far fewer did because of complicated bureaucracy involved, the paper said.
Depending on the distance to be flown, passengers are entitled to €250-600 compensation if there is no force majeur involved, which includes bad weather, the main cause in disruptions last year.
Don't just blame the weather
Millions of passengers were especially hard hit by weather-related delays in the first three months of 2013. A pilot strike in April by national carrier Lufthansa was another major contributor. But critics still cited insufficient action by authorities to improve the situation.
"The number of delays and cancellations is too high," said the Greens' tourism spokesman, Markus Tressel.
He urged airlines to invest more in improving service and German aviation authorities to be more active in protecting consumer rights.
The European Union has moved to amend compensation regulations so that delays must exceed five hours before passengers can seek refunds. The changes, which have also suffered delays due to opposition, will, if pushed through, further reduce motivation of carriers to buck up their service, Tressel said.
Berlin still hard-hit
Meanwhile, passengers flying out of Berlin are still among the most prone to disruptions as the capital's tourism grows faster than its airport handling capacity.
A record number of passengers are using Berlin's Tegel and Schönefeld airports as the city waits for the now long-overdue Berlin Brandenburg Airport (BER) to open.
Traveller numbers at the two existing airports doubled over the past decade as the city became the third most popular tourist destination in Europe after London and Paris.
Last year, Schönefeld airport, with a capacity of seven million, saw 6.7 million passengers pass through. Tegel carried nearly 20 million passengers in the same period – an increase of eight percent over 2011 and nearly double the airport's original intended capacity of 12 million.
The inauguration of the third hub has been delayed by two years until 2016 at the earliest following major mismanagement of construction and corruption scandals.