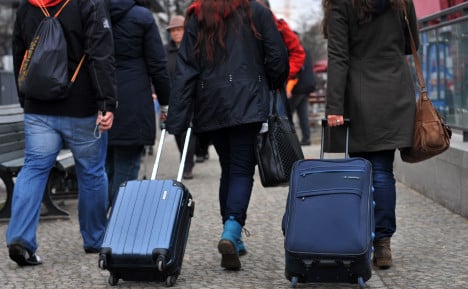 tack-ta-tack-a-clatter-tack-ta-clack. Photo: DPA
It's a hallmark sound in many Berlin streets these days: the thunderous trundling of suitcase wheels on cobblestone sidewalks and excited shouting as hungover guests leave hostels to catch early flights home. That, and the all-night partying that precedes their departure.
But the chorus of residents' complaints is also rising, about this and the general din and mess of so-called "party tourism", the groups that arrive from abroad to live Berlin night life to the full.
"Everyone is advertising: We are the coolest place in Berlin, where everything is possible and allowed," said Monika Herrmann, the mayor of Friedrichshain-Kreuzberg, the east-central district where much of the night life is concentrated.
"I get the impression that some visitors think they are in a kind of Disneyland and we residents are like film extras…People in almost the whole district can't sleep at night with open windows because of the noise," she told the Tagesspiegel newspaper.
This is not a campaign against tourists, the mayor stresses, but rather criticism of those who unreasonably push the boundaries, and "the concept of always wanting more and more".
Discussion about possible steps to moderate the situation and defuse local tensions will follow this summer's tourist season, Herrmann said.
Rubber up, folks
So what does the mayor suggest?
"We must see what works and what doesn't. First steps could be to introduce a code that encourages visitors to avoid littering, excessive noise and generally show respect towards residents.
"In Amsterdam, a behaviour code for tourists brought results. There they also distributed postcards against urinating outdoors," she told the newspaper.
"Some solutions could be really simple – for example, why don't the noisy pull-along suitcases of hostel guests have rubber wheels?"
As for the idea that this is biting the hand that feeds the district, the mayor concedes that tourist revenues are vital for local businesses.
But she also notes that the district government doesn't make any money itself, but still has to pick up the bill for security, sanitation and damage to green areas.
The problems intensify in areas where hostels, cafes and bars are concentrated, like around the district's popular Warschauerstrasse.
This busy road leading across the River Spree is located by the East Side Gallery, a preserved section of the Berlin Wall that draws thousands of visitors daily.
Many young people stay in hostels there to more easily imbibe both the Wall history and the fare of the local bars and clubs.
Pot and kettle
Some commentators backed the mayor's stance: "Then there is the vomiting…that's why I moved out of beautiful Kreuzberg," one reader wrote. "The mood of the 80s and 90s is gone. Please introduce tourist-free zones."
But many others gave short thrift to Herrmann's remarks, saying that Berliners themselves are as much a part of the problem.
"Everyone in this district does exactly as they please, and now it's the tourists who are supposed to get disciplined?" one Berliner wrote.
Some also pointed out that there are enough public order regulations as it is, and these need only to be wisely enforced.
And just set out more public toilets, suggested another commentator, with regard to the public urination issue. Amsterdam has addressed the problem by setting up "pee pavillions" on popular pub crawl routes rather than with postcards, they wrote.
Berlin is the fastest growing tourist destination among Europe’s major cities, hosting almost 27 million overnight stays in 2013, up eight percent from 2012.
The city is tipped to soon challenge Paris (36.6 million nights) for the number two spot. But London still remains unbeatable, with 53.9 million nights.
The German capital’s top tourist attractions are the Reichstag parliament building and Brandenburg Gate, visited by 34 million people since 1999, along with the television tower on Alexanderplatz and Gendarmenmarkt.