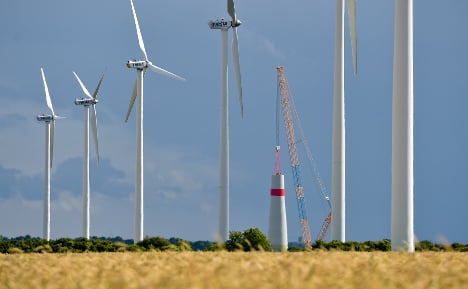 A crane erects a wind turbine in Brandenburg. Photo: DPA

The growth spurt was mainly centred on the north of Germany and the state of Schleswig-Holstein, which profiting from its northern sea winds accounted for a quarter of the new installations.

But while the state constructed 159 wind turbines this year and generated 443 M/W of power, other states lagged far behind. Baden-Wüttemberg built just one wind turbine and Saxony built none.

The overall boom in the sector was attributed to producers rushing to receive financial incentives afforded under the 2000 Renewable Energy Act before revisions took effect on August 1.

Under the act, renewable energy plant operators received, for example, a 20-year guaranteed payment for their electricity generation. But under the revisions they will now have to sell their green energy competitively on the market.

Growth in the sector is expected to slow drastically as subsidies and rebates are reduced by up to 25 percent, said sector officials.

This will pose an "very great challenge" to further development, said the president of Germany's Wind Power federation Hermann Albers.

The Energiewende (energy switch) is a key policy of Chancellor Angela Merkel's third term at the helm of Europe's top economy.

Under the plan, Germany aims to meet 80 percent of its energy needs with renewables by 2050. But it also faces having to balance the interests of its mighty industrial sector while safeguarding jobs.