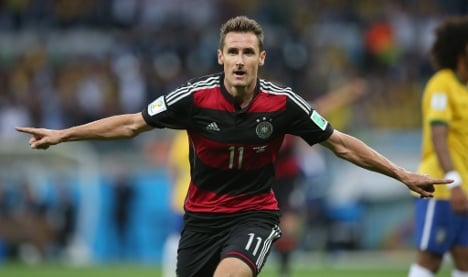 Okay, so he was born in Poland, but Miroslav Klose moved to Germany when he was eight years old, supposedly with only two words of German at the time.

Ja and Tor (goal), perhaps? Dad was a professional footballer, after all, and surely helped instil a deep love of the game in his son.

Since becoming a member of Die Mannschaft in 2001, the 36-year-old striker has put some hard-kicking vim into Germany's game and plenty of discipline, if not the flamboyance that characterizes some of his peers.
Instead, the father of twin boys regards staying away from alcohol and "always getting an early night" as two of his steadfast rules.
"Miro", as he's known to fans and colleagues, has played four World Cup tournaments. Not only does he hold the title of most number of goals scored in tournament play, but he also has the most number of top three finishes (4) for an individual player.
With five goals each time, he was awarded the Golden Boot trophy in his World Cup debut in 2002 and again when the tournament was played on his adopted home turf in 2006.

His boots were also brought a magic touch for the national team, which never lost a game in which he played.

From woodworker to striker
However, Klose has not always had a football at his feet. For four years he worked as a carpenter, which he said shaped him mentally and prepared him for his further life and fulfilling his footballing dream.

"Thank God it worked," he said of his initial foray into professional play.

The striker started his club career with FC Homburg in 1998 and currently plays in the Series A ltalian league for Lazio. As well as for the Italian team, he has also helped win league titles with Bayern Munich, Werder Bremen.

And it seems his team mates and trainer will miss him not only for his scoring skills but as a well-rounded person too.

National coach Joachim Löw told the German Express newspaper that he had "never met a player that is so down-to-earth, humble, professional, reliable and full of team-spirit".
"He will be missed as a player but also as a human being," Löw said.

Klose cemented his reputation for decency in 2012 when he won a fair play award after telling the referee that a goal he had scored was invalid because the ball touched his hand first.

In 2005, he won a similar prize in a game against Bielefeld, when he declined to take a penalty awarded for a yellow card against the opposing goalkeeper. The keeper had touched the ball first, Klose insisted, and the yellow was revoked and the penalty annulled.

But the devoted Catholic still appears to have a cheeky side (phew!): he continues to celebrate goals with his signature flip, despite FIFA's attempts to reduce over-the-top celebrations.

Nor was he able to resist responding to Ronaldo's "Klose – welcome in the club of 15 [goals]" Tweet in Brazil by announcing his own "club of 16 – and everyone's welcome to join" after his final goal of the tournament.

The no-alcohol rule likely flew into touch too after Germany's 1:0 victory over Argentina. Before the game, Klose told reporters that "if we do win the trophy, I can imagine that I will relax and there is a party beast, even in me." Klose with his twin sons, Noah and Luan.