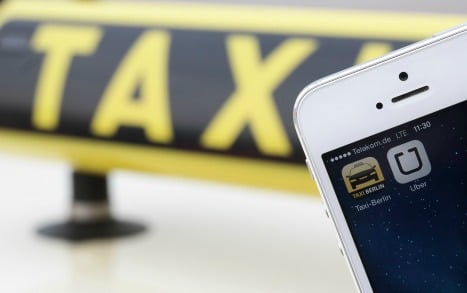 The Berlin Senate handed down the order on Wednesday evening, demanding that the San Francisco-based Uber stop offering its services in Berlin through its popular smartphone app.

Uber, which now risks a €25,000 fine for each violation of the ban, immediately condemned the move as restricting consumers' transport options.

"The decision from the Berlin authorities is not progressive and it's seeking to limit consumer choice for all the wrong reasons," Fabien Nestmann, Uber General Manager for Germany, said in a written statement.

Uber's UberPop service allows individuals to register as drivers and offer rides to other people at prices set by Uber, unlike taxi companies that abide by the city's pricing that ranges from 20-25 percent higher than the US company.

But the city government says it is imposing the ban to protect passengers.

Uber is putting passengers in the care of "non-approved drivers in unlicensed vehicles without insurance for the passengers," in case of an accident, it said.

But the city statement also conceded that the move would help protect Berlin's taxi industry.

"I'm very happy," said Richard Leipold, head of the Berlin Taxi Association, whose drivers joined thousands of others in a one-day protest against Uber on June 11.

Leipold and the drivers he represents believe Uber has created an unfair playing field because their prices are unregulated, their drivers are not required to have a taxi license and their passengers are not insured against accidents.

"We don't mind competition that obeys the laws," said Leipold. "If Uber plays by the rules, that's fine because we play by the rules."

Uber, however, casts itself strictly as a technology company facilitating a ride-share service.

That stance puts it in a regulatory grey zone that has created pushback from taxi drivers in cities across Europe, like Paris, Brussels and London.

In Germany, the city of Hamburg tried to ban Uber in July, but a judge granted the company permission to continue operating while a court case against it plays out.

Nestmann has already signalled that Uber will challenge Berlin's decision in court. "We fully expect that Berlin will overturn the prohibition order."

Still on course to expand

Uber also maintained that their planned expansions to Cologne and Stuttgart won't be hampered by the ban. The company launched its Düsseldorf service last Friday.

In Berlin, Uber user Mariusz Ciesla says the ban doesn't bother him. "My experiences with Uber in Berlin were mediocre, not superior to a cab, like they were when I used it in the US."

"I had Uber drivers in Berlin that I was afraid driving with, because I thought we're going to crash all trip," said Ciesla, who designs smartphone apps and mobile websites.

Support for Uber on Twitter was lukewarm in a city known for fostering innovation and tech start-ups.

Nestmann seized on that reputation in his statement. "Many progressive, forward-thinking cities around the world are embracing Uber," he said. "Berlin shouldn’t be left behind.”