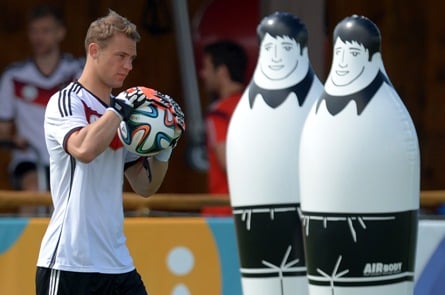 "Manuel Neuer is one of the most popular footballers, and since the World Cup he's been the most requested figure by our visitors," said museum director Sandra Schmalzried.

Schmalzried expressed regret at being unable to honour the entire Germany squad that brought home the trophy from Brazil, saying, "at €200,000 per player, it's not possible".

The Bayern Munich 'keeper, who was voted the country's player of the year in a poll conducted by German football magazine Kicker, will be subjected to a series of measurements and photographs before a team of 20 experts begin a four-month project on the model in London.

The waxwork of Neuer will join that of another former Bayern and Germany goalkeeping legend Oliver Kahn in the Berlin museum, as well as US coach Jürgen Klinsmann. Whether the likeness will faithfully capture the 28-year-old's boyish good looks remains to be seen. And it is unlikely to trump Oliver Kahn's effigy for sheer goalie ferocity.

Neuer's predecessor as national goal keeper is a favourite among visitors, who routinely pose for photos pretending to flinch in terror in front of the screaming Kahn.