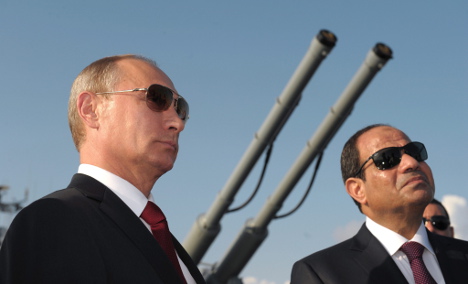 Merkel told the Sächsische Zeitung newspaper she was "working very hard to keep the lines of communication open" with Putin despite the EU's decision last month to level sanctions against Russia over its actions in the ex-Soviet state.

However, Merkel said she would never accept the annexation of the Crimean peninsula from Ukraine in March this year.

She said there was a basic consensus "that we Europeans respect the territorial integrity of our states – that we don't unilaterally change borders".

"If such an annexation, which violates international law, were to become a political instrument that were accepted without challenge, then everything that has allowed us to live in peace and prosperity for half a century would be in danger," she said. "That is why we do not accept Russia's actions."

Merkel, a fluent Russian speaker, has held regular talks by telephone with Putin, who served as a KGB agent in Dresden during the Cold War, since the Ukraine crisis erupted, urging respect for Ukrainian sovereignty.

But the shooting down last month of Malaysia Airlines flight MH17, allegedly by pro-Moscow rebels with a Russian-made missile, led the EU's top economic power to adopt a firmer line.

Meanwhile on Wednesday 262 Russian lorries officially delivering aid to war-torn Ukraine were approaching the nation's border. The Ukrainian government has raised fears the convoy could be a cloak-and-dagger cover for a large-scale Russian military invasion.

Before the convoy set off on Tuesday, Russian TV showed grain, medicine and baby food being loaded onto the trucks, which media said would deliver aid to civilians trapped by fighting in eastern Ukraine.