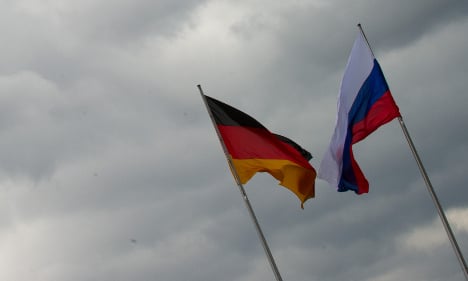 The latest data from the ZEW institute's widely watched investor confidence index showed a sharp drop in August and pushed the euro and European stocks lower.

The figures came just two days before Germany and France are expected to reveal weak growth data for the second quarter, with Italy already in recession.

It is the eighth monthly decline in a row and the sharpest since June 2012.

Analysts had been projecting a much shallower drop to 18 points.

The ZEW institute did not name specific trouble spots, but the German economy ministry has warned that the Russia-Ukraine crisis is hurting Europe's top economy, along with unrest across the Middle East.

"The decline in economic sentiment is likely connected to the ongoing geopolitical tensions that have affected the German economy by now," ZEW said.

When the index last fell like this in June 2012, the eurozone was at risk of breaking up.

"There will be increased focus on German data following both this report and last month's fall on the closely watched IFO survey indicator," noted Daniel Sugarman at ETX Capital.

The factor most undermining confidence, analysts say, is the "Putin effect", or Russia's policy towards eastern Ukraine, the conflict there, and related, reciprocal sanctions between the United States and European Union, and Russia.

Germany has the biggest, and recently the most dynamic, economy in the 18-member eurozone where the second-biggest economy is in France.

Both countries are to reveal second-quarter growth data on Thursday, and in both cases they are expected to be bad.

In Germany the data may show 0.1-percent shrinkage of output from activity in the first quarter, and in France growth may be zero at best, analysts forecast.

The deeper picture of the economy in France is a particular worry to EU authorities and in Germany.

Last week, the Bank of France said it expects the economy to grow by 0.2 percent in the third quarter from the previous three-month period.

If the figures for the three months to June show zero growth, and given that French output in the first quarter was flat, the government would not be able to achieve its target of 1.0 percent growth for the year.

France, which is having trouble enacting substantial economic reforms, depends heavily on the German economy — so when Germany slows down, French exporters feel a knock-on effect.

The third biggest eurozone economy is in Italy, which fell back into recession in the second quarter, official data showed last week.

On Tuesday, the ZEW statement made for gloomy reading. "In particular, current figures on industrial production and incoming orders suggest markedly reduced investment activities on the part of German firms against the backdrop of uncertain sales prospects," it said.

"Since the economy in the eurozone is not gaining momentum either, the signs are that economic growth in Germany will be weaker in 2014 than expected," ZEW added.

At Capital Economics in London, economist Jennifer McKeown said: "The fact that the index is now barely positive means that only a very small majority of investors see economic conditions improving rather than deteriorating over the next six months."

The ZEW data "show that recovery of the German economy is on shakier legs that people would have thought until very recently," Postbank economist Heinrich Bayer added.