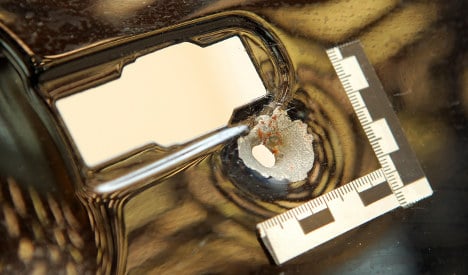 Prosecutors say the man, identified as Michael Harry K., was a "frustrated loner" and claim he fired more than 700 times at trucks and cars, leaving several people injured, until his arrest in June 2013.

The 58-year-old faces five counts of attempted murder, as well as grievous bodily harm and other charges, and could face a lengthy prison term if found guilty by the district court in the Bavarian city of Würzburg.

The charges relate to 171 different incidents.

The accused, who lives in western Germany, had wanted to teach other truck drivers a "lesson" over their road behaviour, local DPA news agency quoted senior prosecutor Boris Raufeisen as saying at the trial's opening.

He claimed that the defendant was aware his missed shots could cause "serious accidents with considerable consequences to the point of death of other road users".

The defence has rejected the attempted murder charge and, through his lawyer, the accused vigorously contested in court that he had considered that people could be hit.

"I reject the accusation of having accepted that people might die," he said in a statement read out by his lawyer.

But he admitted that from around late 2009 he fired a "number I can't recall of shots" at lorries' loads on German motorways.

During the investigation he had said that he didn't want to hurt anyone and only aimed at a truck's load or freight hold.

He also said he had acted after once nearly being pushed off the road by a car transporter.

Presiding judge Burkhard Poepperl said the accused had referred in previous questioning to a "war on German motorways" and the defendant confirmed that that was his view.

In 2009, the year after the alleged shootings began, a businesswoman in a car was critically injured after being struck in the neck and crashing into the motorway barrier at high speed.

The defendant also apologised in the statement to court to the injured woman and to those whose vehicles had been damaged.

The investigation into the motorway shootings, which began at the latest in 2008, was complicated because the drivers of the vehicles hit often didn't notice until arriving at their destination.

Police eventually made an arrest after setting up a technical surveillance system on stretches of motorway to register licence plates.