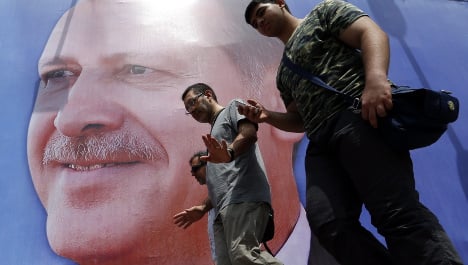 Turkish Prime Minister Reccep Tayyip Erdogan has claimed victory as his country's first popularly elected president on Monday. Erdogan thanked supporters of his Justice and Development (AK) party in Ankara, while promising the "start of a new era" for Turkey.

He has promised Turkey a new constitution that would include granting the presidential office executive powers. The election of the traditionally conservative Islamic party leader to top office has caused some concern among German political leaders.

"Erdogan's Turkey has no place in Europe," Andreas Scheuer of the Christian Social Union (CSU), the Bavarian sister party to Angela Merkel's Christian Democrats (CDU), told the Hannoversche Allgemeine Zeitung on Tuesday. Scheuer called for the end of negotiations for Turkey to enter into the European Union.

Other parties are backing the CSU's call for a stop to the talks. Green party chairman Cem Özdemir told Nordwest Zeitung that an Erdogan-ruled Turkey is an "increasingly authoritarian state", adding that given current instabilities in Iraq and Syria as well as the conflict in Israel and Palestine, a stable Turkey is key to European safety.

The Chairman of the Foreign Affairs Committee in the European Parliament, Elmar Brock (CDU) told Die Welt daily paper that Erdogan's transformation of Turkey into an autocratic state would damage the foundation of the EU entrance negotiations.

Germany's newspapers echoed the sentiments of its political parties.

"The path to an authoritarian government is paved," claimed the popular daily Bild in its coverage of Edrogan's election.

In an article entitled "What Germans need to know about Erdogan", the paper wrote:

"It's not easy to explain to a German why 20 million Turkish people voted in a president caught in the middle of a multi-million Euro corruption scandal. To understand, one has to be Turkish."

The left-leaning Tageszeitung said "Victory but not a win," adding that initial polling had the AK Party leader polling much higher than the results showed on Sunday night. Reports also lauded the unexpected success of the People's Democratic Party (HDP) candidate Selahattin Demirtas, who took 10 percent of the popular vote.

"The one-man show, feared by many and unwanted by few, is far from perfect. Although Erdogan exhausted his powers of acting Prime Minister to engineer a grotesquely unfair election campaign through his control or intimidation of local television coverage so that coverage of opposing candidates was barely seen, the outcome of this election compared to the 2011 parliamentarian election hardly changed."

Tagesschau reporter Reinhard Baumgarten said: "Turkey under President Erdogan may become more Islamic, more like the Ottoman empire, and more oriental. He aspires to a presidential system … modelled after Russia under Vladimir Putin."

The Sueddeutsche daily says the victory isn't enough for the polarizing President elect. Instead of creating a "checks and balances" office like that of the US, a presidency under Erdogan will forego a two-chamber parliament in Ankara.