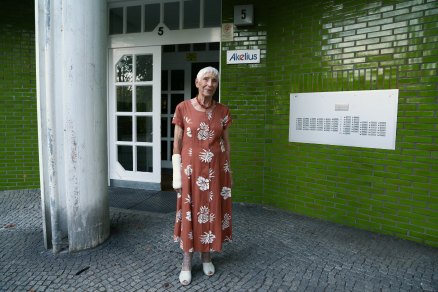 Christa Kaes stands outside the front door of the Akelius-owned building at Hansa-Ufer 5. Photo: Tomas Urbina

Some came with canes, some with walkers, but they all came ready for a fight.

On Monday afternoon, elderly residents of the apartment block at Hansa-Ufer 5 gathered for a tenants meeting in the modest common room on the ground floor of the building on the banks of the Spree River.

In Berlin, it's a familiar story. The rent spikes and those who can't afford it are forced to move out.

In this case, the landlord — Swedish property giant Akelius — wants to renovate the building and surrounding property and wanted to charge 40-65 percent more rent. But this group of old folks wasn't about to go quietly.

The clash has gained public attention through an online campaign after Akelius announced the rent increases last April. They also proposed major construction, renovation and retrofits to the building and backyard.

The move took seniors such as 83-year-old Christa Kaes by surprise.

"I was shocked. When I came here I thought I would be able to stay here and live in peace," says Kaes.

Kaes moved into her small 42m2 apartment about a year ago. She sold her village house and came to Berlin after her husband died so she could be near her grandson and her daughter, Eva-Maria, who lives in the building next door.

But last Thursday, with public and media attention on the dispute growing, Akelius sent the seniors a letter offering to drastically reduce the rent increases. For Kaes and her neighbours, the offer was a relief.

"I was afraid I would have to move and look for another apartment."

But Akelius remains committed to its construction plans and that's got the seniors pushing back.

"On the face of it they gave us a spoonful of sugar, but if we turn around, they kick us," says Kaes. "It's not an honest offer."

An offer with strings attached?

Kaes and her fellow residents, most of whom have lived in the building for more than a decade, believe the lower rent increase offer will also require them to accept all of the Akelius construction plans, which they believe would be worse than the rent increase.

"I will lose everything that's familiar to me here," says Kaes. "We will all lose our social contacts and it will break everything that we love about this place. Maybe I would even have to move and start again somewhere else."

But Ralf Spann from Akelius in Berlin says the offer has no strings attached. "The offer is not connected to any conditions. We would like to modernize the property. The tenants will have a better place to live without paying extra or paying much less than legally allowed and common practice."

The company plans to build a new infill apartment block in the backyard of Hansa-Ufer 5 and add penthouse apartments on top of the existing structure.

For the tenants, that would mean the loss of half of the green space and trees in the backyard, as well as persistent noise, dust and debris for the seniors who spend most of the day in and around their building.

Akelius also plans to seal off the open shared terraces on the back of building with windows as an energy efficiency retrofit project.

The elders use the open-air corridors to get fresh air and sunshine and regularly have barbecues or tea there with their neighbours. They say the retrofit is not needed because their energy use of the apartments is very low.

Akelius also proposes to move the prized social room to the laundry room that is about half the size.

Every Monday, a group of the building's elderly women gather in the social room to sing German folk songs and "old Berlin songs".

Led by Kaes on the keyboard, the choir of women aged 75 to 97 is one of the social opportunities the seniors cherish.

"Social contact is very important for me," says Kaes. "It's my nature to want to be in contact with others."

"I thought I would be safe here"

Akelius, which also operates in the UK and Canada, bought the building from the city of Berlin in 2007, adding 66 apartments to their more than 15,000 units across Germany.

It was built in 1975 as a retirement home on the banks of the Spree River in the Moabit district, near Berlin's Tiergarten. Today, nearly half the units are rented by seniors living on fixed incomes.

Now the occupants are bracing for a major disruption. The construction, renovations and retrofits that Akelius is proposing will take at least 18 months.

For women like Ingeborg Koske, who lived through the aftermath of World War II in Berlin as one of the city's Trümmerfrau — women who helped cleared the bombing debris — Akelius' plans are tough to bear.

"I thought I would be safe here, it's very difficult," says Koske, who remembers in 1946 when she was paid 72 cents per hour to cut and load stones used to rebuild the police headquarters at Alexanderplatz.

The 86-year-old was 18 at the time and is one of 12 former Trümmerfrauen living at Hansa-Ufer 5.

Public and media attention grew when the group took their grassroots campaign to the web with an online petition. At first they were only seeking 500 signatures, says Kaes' daughter, Eva-Maria.

"We were overwhelmed by the reaction we got," says the junior Kaes. The petition reached 500 signatures in the first few minutes and shot upwards from there.

It now sits at more than 56,000. "This is what gave us the strength and the power to negotiate with Akelius.

"It's a pity," says Thomas Isenberg (SPD), president of the Berlin Senate and representative for the Moabit district, who has signed the petition and plans to write a letter to Akelius.

"The city is trying to increase its housing stock and in this case there is nothing by law that the city can do to change the social behaviour of the company."

The discussions are ongoing. Akelius says they remain in contact with the tenants. The seniors, including Kaes, say they want Akelius to delay their construction plans.

Ralf Spann says the construction plans are set to move forward this year or next. But Kaes says that if necessary, she's willing to go to court.

"I'm ready to fight for my rights and the rights of the other seniors here to have peaceful last years."