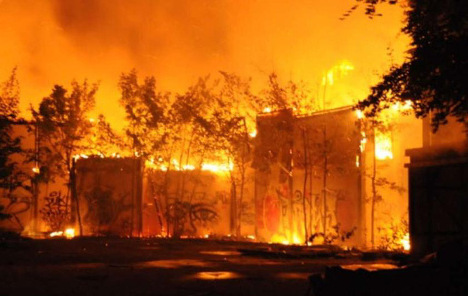 Four suspects, all men aged between 19 and 29, are suspected of lighting two separate fires on the site of the abandoned Spreepark in Berlin.

The fires destroyed a large part of the remaining buildings and scenery on Sunday night.

The men first came to the attention of police after they set a car alight in the city's western district of Steglitz-Zehlendorf, police said in a statement.

A police reconstruction showed the same men had been spotted near the old park in the city's southeastern district of Treptow late on Sunday.

After what police described as "intensive and drawn out interrogations," three out of four of the men admitted to having started the fire in the park. They were set to be brought before a magistrate later on Tuesday.

The cost of the damage to the area hit by the fire is not yet known, Spiegel said. A spokeswoman for the Berlin city authority, which bought the area in April this year, told the magazine that the clean up operation must begin as soon as possible.

Since the fire curious visitors have been continuing to look around the remnants of the old theme park, much of which she said was unstable and unsafe.