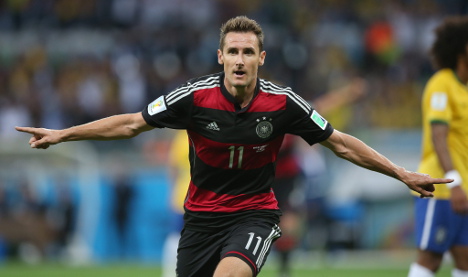 The 36-year-old leaves the German national team as a World Cup winner after last month helping Joachim Löw's side to their first global crown since 1990 when they defeated Argentina 1-0 in the Rio-hosted final.

The Lazio frontman picked up his 16th goal, in what was his fourth World Cup, to surpass Brazilian Ronaldo as the tournament's leading scorer.

Klose, who won two German titles with Bayern Munich following spells with Kaiserslautern and Werder Bremen, said he had "fulfilled a childhood dream with the title in Brazil" and lived "unforgettable moments with the national team", according to a statement released by the German football federation.

"The success of the team stood and always stands for me in the highest place," Klose said.

"With the national team I achieved our greatest goal, a goal which we had together within the squad. In addition, I achieved personal goals and those who know me know that I am very ambitious, but I am a striker and the task of a striker is to score goals."

"Therefore the records never concerned me, but it was always about giving my best for the team."

He broke the World Cup record for goals in July when he found the target for his 16th strike during the 7-1 semi-final rout of Brazil. He is one of just three players, alongside Pele and Uwe Seeler, to score in four World Cups, and finishes his Germany career as the country's all-time leading scorer with 71 goals in 137 appearances.

Löw was quick to heap praise on Klose, saying: "For Miro it was always an honour to be called up into the national team. He's given everything for Germany.

"I have the biggest respect for his decision and for his incredible career in the national team, which will be a tough one to better."

Federation president Wolfgang Niersbach said Klose was "not only an exceptional player but also an absolutely exemplary man".

"With his 71 goals for the national team and his 16 goals in the World Cup, he has established two phenomenal records that will ensure him a place of honour in the history books."

Klose kicked off his international career against Albania on March 24, 2001, going on to enjoy a 13-year career with the team – only Lothar Matthaus having won more caps (150).