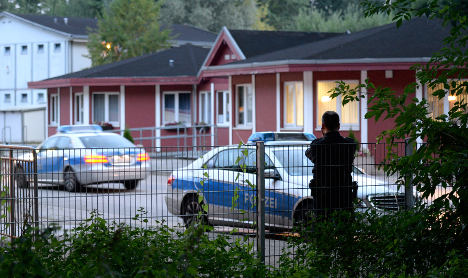 This hostel in Hamburg was cordoned off amid an Ebola scare. Photo: DPA

"Samples from the suspected case have been sent for testing to an international accredited laboratory for approval, results will be available in 48 hours," Rwanda's health ministry said in a statement.

The patient is the first to be tested in Rwanda since the Ebola outbreak in west Africa.
Minister of Health Agnes Binagwaho said the patient was a German medical student, who had recently spent time in Liberia.
He had a fever and malaria but for "100 percent security" Rwanda had quarantined him, until test results – expected within two days – were back, she said.
An Ebola scare also broke out in Hamburg on Sunday after a 28-year-old man from Sierra Leone was initially thought to be the first person in Germany to be infected with the disease.
He was taken to University Hospital Hamburg-Eppendorf (UKE) after he complained of vomiting and fever. He had been in Sierra Leone the week before but tests showed he was not infected.
His accomodation in Hamburg – a homeless hostel – was cordoned off by police.
Ebola has claimed nearly 1,000 lives in west Africa in the worst outbreak in four decades, prompting the World Health Organization last week to declare the epidemic a global health emergency.
Like other nations across east Africa, Rwanda said it had put in place measures against the deadly virus.
"Surveillance systems and emergency management systems have been established," the health ministry said.
"Health workers have been trained across the country and are vigilant."