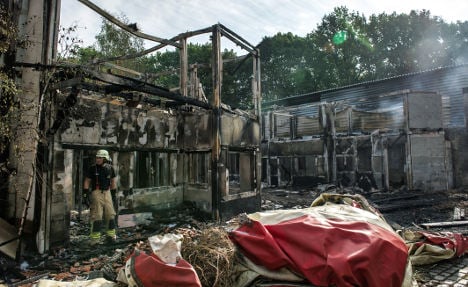 Two separate fires on the site of the abandoned sixties-era Spreepark in Berlin have destroyed a large part of the remaining buildings and scenery. Nobody was hurt.

Fires 200 metres apart were discovered at the site had been a favourite with tourists, trespassers and urban explorers.

Firemen had to for call police assistance after the scale of fires, thought to have broken out around midnight, became clear.

Emergency services were alerted just before 1am after a fire was spotted in the western part of the 5,000 m2 park, where buildings of a mock-western town were located.

Hurrying towards the scene, firemen spotted the flames from a distance and called in back-up. "Old houses and scenery were burning," the fire service wrote in a statement. Over 100 firemen were deployed many of them with heavy equipment and breathing masks.

Firemen had difficulty battling the blaze in the remote area, as the nearest water hydrants were situated 1.5 kilometres away.

Police and fire service boats were sent in to help the emergency workers by pumping water over from the nearby Spree river.

The buildings of a fake Western-style town completely destroyed in the blaze, which the fire service said they had put out by 4.30am.

Originally opened in the late 1960s in what was then East Berlin as Kulturpark and revamped as Spreepark after reunification, the theme park closed in 2002 after the owners went bust and left the country.

It has since become a cult favourite of trespassers and urban explorers. More recently, tourists have been able to go on tours of the park's rusting old rides.

Click here for photos of Spreepark before the fire

Bild newspaper reported that Berlin city authorities bought the area this spring and ordered the previous owners to clear it – an order which had so far been ignored.

Police are treating the incident as arson and have launched an investigation.