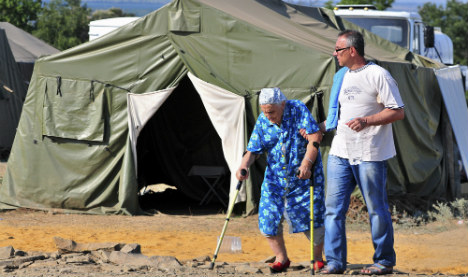 Such a move "violates international law, and will provoke additional consequences," the White House said in a statement afterwards, referencing the numerous economic sanctions already in place against Moscow.

"Any Russian intervention in Ukraine, even under purported 'humanitarian' auspices, without the formal, express consent and authorization of the government of Ukraine is unacceptable," the statement said.

Obama and Merkel also renewed calls for Russia to attempt to find a political solution to the crisis.

The US president had a similar conversation with British Prime Minister David Cameron earlier in the day in which the two leaders agreed such a move would be "unjustified and illegal."

Russian Foreign Minister Sergei Lavrov had called for Washington to back a Moscow initiative for a "humanitarian mission" to east Ukraine.

Lavrov had telephoned his US counterpart John Kerry "to underline the need for urgent measures to avert the imminent humanitarian crisis" there, according to a statement issued by the Russian foreign ministry Saturday.

The West has accused Russia of abetting the insurgency in east Ukraine by supplying it with weapons, an allegation that Moscow firmly denies.