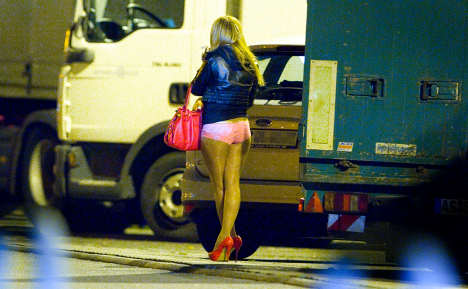 A prostitute waits for customers at a truck stop. Photo: DPA

There are now 400,000 prostitutes working in Germany, catering for 1.2 million clients every day.

Conservative politicians want to tighten rules to protect them from exploitation and forced prostitution.

Central demands from the centre-right Christian Democrats (CDU) include raising the legal age limit from 18 to 21 and obligatory health checks for sex workers.

The party also wants to introduce possible jail sentences for the clients of forced prostitutes.

The centre-left Social Democrats (SPD) rejected these suggestions on Friday as "counterproductive."

Critics say tighter rules might make it more difficult to fight forced prostitution in Germany – particularly a problem among Eastern European women brought to the country to work in large-scale brothels.

Johns might be less willing to give police vital evidence if they were threatened with prosecution, Reimann said.

Meanwhile, a higher age limit would just push younger women into illegal prostitution, she added. "It won't solve the problem."

The CDU's right-leaning Bavarian sister party, the Christian Social Union (CSU), is outraged at this reluctance to regulate the booming German sex trade.

"It was the [SPD and Greens'] prostitution law of 2002 that meant Germany became the brothel of Europe in the first place," CSU MP Max Straubinger told the Passauer Neue Presse on Friday.

Since then, prostitutes working in Germany have been fully above board. They are allowed access to health insurance, also as freelancers, and must pay income tax on their earnings.

All eyes are on next Thursday's meeting of the Families Ministry, at which the new rules should take a more concrete shape. A draft law is not due until the autumn.

"The new rules will aim at better protecting prostitutes from exploitation and limits on their sexual self-determination," Families Minster Manuela Schwesig said on Friday.

Brothels must "be put under effective legal controls," the minister demanded.