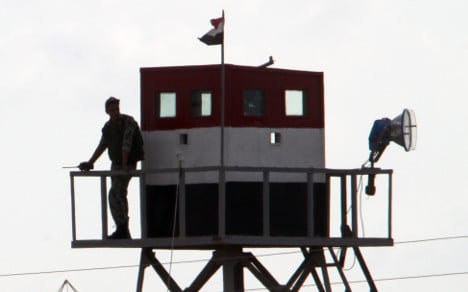 An Egyptian border guard mans a watchtower at the Rafah border crossing between Gaza and Egypt when it was briefly opened in 2010. Photo: DPA

He also called for Germany to bring EU governments together to develop a solution to avert the unfolding economic and humanitarian catastrophe in Gaza.

Lieberman demanded that Germany and the EU send inspectors in to the region to oversee trade between the Palestinians and neighbouring countries.

Germany should "take responsibility as instigator of such a mission," said Lieberman, with the aim of preventing violence escalating further.

His comments support an earlier suggestion by German Foreign Minister Frank-Walter Steinmeier to re-establish the EU Border Assistance Mission at the Rafah crossing between Egypt and the Gaza strip.

EU police manned the border crossing point – Gaza's only one with any country other than Israel – between 2005 and 2007. The border is usually officially closed.

Israel fears that if Palestine was left to man the crossing alone, it would lead to weapons and exiled extremist leaders entering the region.

The offer to resume the EU policing mission and re-open the border was reiterated by German, British and French representatives at peace talks in Cairo on Wednesday.

Meanwhile, some reports suggested some very badly wounded casualties of Israel's four-week offensive in Gaza were being allowed to cross the border at Rafah on their way to Germany and Turkey for treatment.

Ambulances at #Gaza crossing taking some of most seriously wounded to Turkey & Germany.