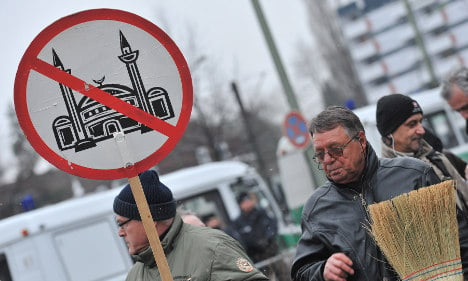 Demonstrators protest against the construction of a mosque in Berlin in 2013. Photo: DPA

Just 44 percent of people surveyed by the Forsa opinion institute for Stern magazine agreed with the former head of state that Islam was part of Germany.

However, a second question asking how people thought Germany should deal with hostility to Muslims found that 53 percent of people believed that it should be treated as seriously as anti-Semitism.

Young people and supporters of the Green Party were most likely to look favourably on Islam, with 61 and 69 percent positive responses respectively.

People in East Germany and the over-60s were among the least likely to agree. Only 31 percent of Easterners and 39 percent of seniors sided with Wulff.

The least welcoming to Islam were respondents close to the eurosceptic party Alternative für Deutschland, 82 percent of whom did not think Islam was a part of German society.

But a majority of 57 percent of AfD supporters still thought that hostility to Muslims was as serious as hatred against Jews.