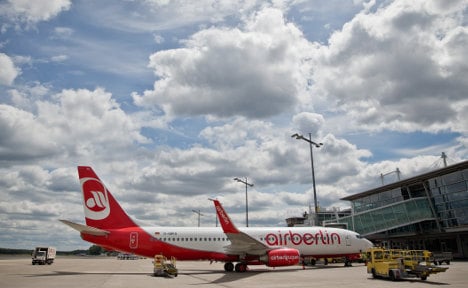 An Air Berlin plane sits on the tarmac at Nuremberg airport. Photo: DPA

One of the two wheels on the right side of the main landing gear came loose as the plane came into land in the southern German city of Nuremberg on Wednesday, an Air Berlin spokeswoman confirmed.

The Bombadier Q400 plane had been carrying 54 passengers from Split in Croatia. No one was hurt in the incident.

"Air Berlin will now conduct intensive checks on the aircraft and is working closely together with the authorities. Air Berlin regrets the resulting unpleasantness for passengers," the airline said.

SEE ALSO: One dead, one missing after plane crash