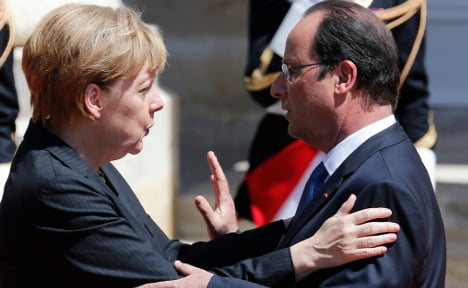 Asked about comments made by the French leader this week calling for "stronger support of growth" by Germany, a government spokeswoman said Berlin saw "no reason" to change tack.

"Germany is already an important or even the most important growth engine in the eurozone," the spokeswoman, Christiane Wirtz, told reporters.
"Which is why these rather general comments coming from Paris give the German government no reason to make any corrections to its economic policy."
Hollande made the comments in an interview published on Monday, arguing that Germany's trade surplus and its relative fiscal health "would allow it to do more in terms of investment".
"That would be the biggest favour that Germany could do for France and for Europe," he said.
Since the start of the eurozone debt crisis in 2010, Germany has faced accusations that by failing to use its standing as Europe's biggest economy to do more to kickstart growth, it is leaving struggling partners in the lurch.
Meanwhile its insistence on fiscal discipline in exchange for aid to debt-mired countries has left Germany open to accusations that it is exacerbating the problems it aims to help solve.
Under Chancellor Angela Merkel's left-right "grand coalition" government which took power in December, Germany has pledged more public spending on infrastructure and education and has passed a national minimum wage which it says will boost consumer demand.
But it has continued to keep a tight lid on financial outlays to meet its goal of a balanced federal budget from 2015.
France, meanwhile, plans to cut spending and taxes to trim €18 billion from the deficit this year and €50 billion in 2015.
But key indicators for the French economy – the second-biggest in the zone – suggest that it is lagging behind the recovery of other leading members of the European Union, notably Germany.