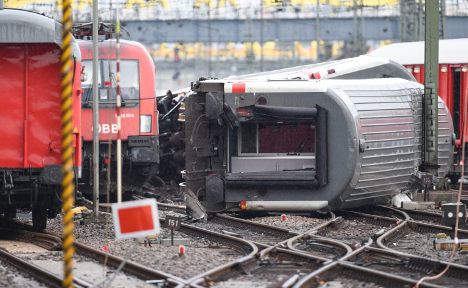 The aftermath of the crash. Photo: DPA

Repair work is expected to last through the beginning of the week, the Deutsche Bahn spokesperson said. Passengers should expect alterations to timetables in the Mannheim area.

The station forms one of the key nodes of the German railway network, especially for long-distance traffic.

Investigators remain unable to say how the freight train came to ram the Eurocity service side-on. The accident derailed five carriages, of which two were overturned with 110 people aboard. The low speeds of the trains meant that there were no deaths, but 35 people were injured, four of them seriously. Police said they were not ruling anything out in the search for the cause of the collision. The station's maintenance records are being checked as a faulty points system may have been to blame. Other possibilities raised by the investigators' spokesperson included faults with the signals and on the trains themselves.