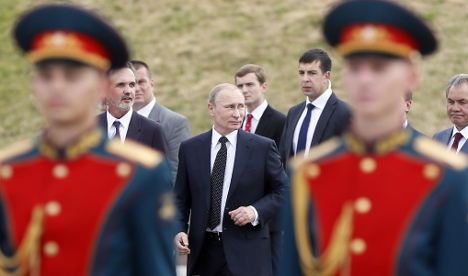 Vice Chancellor and Economy Minister Sigmar Gabriel has withdrawn his authorization for the training camp project, which had already been put on hold in March due to Moscow's "indefensible" annexation of Ukraine's Crimea region, his spokesman said.

The spokesman confirmed a report in the daily Süddeutsche Zeitung citing a document including the decision to scrap the €100-million contract.

Russia previously called the decision to halt the arms deal "unconstructive", accusing Berlin of acting under pressure from the United States.
German defence group Rheinmetall, the contractors for the military training camp, had said in March that the company would fulfil its contractual obligations to build the centre, which German media said would train 30,000 soldiers a year.
The camp was to have been built in the Volga region, and was scheduled to open later this year.
The firm could not immediately be reached for comment. By stopping the deal, Germany goes beyond economic sanctions against Russia agreed last week by the European Union.
Those restrictions ban arms exports to Russia but do not cover existing contracts including a €1.2-billion deal by France to deliver two Mistral warships to Russia.
Paris has said it would go ahead with the sale of the first vessel, drawing criticism from European partners including Germany and Britain.
In 2012, Germany sold €40 million worth of arms to Russia, but arms sales were halted in April this year.
SEE ALSO: Germany denies 'land for gas' deal with Putin