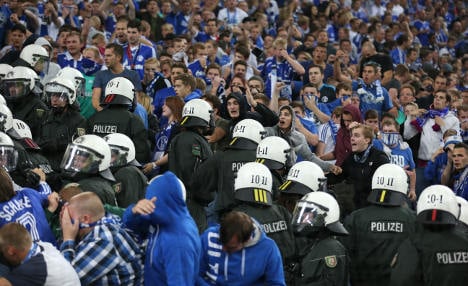 A leaked document from the North Rhine-Westphalia (NRW) interior ministry, authored by interior minister Ralf Jäger, proposes a pilot project that would see stark reductions in police numbers at fixtures.

Under the proposals, August and September matches of the first and second Bundesliga and the third division would be “closely examined” to find games which could take place “without riot police deployment, or with a much smaller deployment than in previous years”.

“NRW police want to send a signal from the beginning of the 2014-2015 season and strengthen the responsibility of fans and clubs,” the document which was leaked to Bild newspaper continues.

Jäger had threatened last year to end police protection at Schalke 04 home games in Gelsenkirchen after a controversial deployment at a match against Greek side PAOK Salonika. Crowd trouble led to 23 police officers being investigated for their heavy-handed approach.

Reinhard Rauball, president of the German Football League (DFL), said in a statement on Monday: "We were not informed in advance of such a plan. But the NRW interior ministry's plans are perfectly understandable. We'll see what the results of the pilot project are.”

Rauball added that Interior Minister Jäger had promised him privately that "this was not about the police being withdrawn from public space".

Jäger's scheme follows the imposition of a share of match day police costs on the DFL last month by Bremen, so far the only state to take such drastic action. The DFL has threatened legal action and cancelled matches in response.