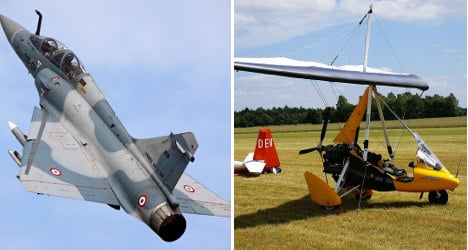 A Mirage 2000 fighter jet was scrambled after a German tourist sparked an alert. Photo: Martin Pettitt/Airwolfhound/Flickr

A Mirage 2000 fighter jet was scrambled after the German tourist set off alarm bells after flying over two nuclear power stations in the south of France, French TV station TF1 reported.

The German, who had taken off from Avignon on August 1st  for a day’s flying, was forced by authorities to land in the town of Valence, France’s air transport police (CGTA) said.

After flying over the Marcoule nuclear site in the Gard department of southern France and the Tricastin in the Drôme, the Mirage fighter jet was dispatched and escorted the German tourist to the airfield at Valence.

Security at French nuclear power stations has been repeatedly called into question in recent years. Anti-Nuclear campaigners calling for plants to be closed claiming the poor security makes them an easy terrorist target.

In March this year, around 60 activists from Greenpeace stormed Fessenheim plant – France’s oldest power station to highlight the lack of security and denounce “the risks” taken by France and other countries in Europe by continuing to use nuclear power.

The activists, who include nationals from several European countries including Germany, the Netherlands and Italy, climbed up to the roof of part of the plant next to one of the nuclear reactors to unfurl a banner reading “Stop risking Europe”.

For his part, the German tourist insisted there was nothing sinister behind his flight, telling police that he had flown over the sites by mistake.

He said he flown too low and didn’t look carefully enough at the navigational charts.

He was released after questioning.

@TheLocalFrance The fighter jet flew really low just over us on the way to intercept the jet, what a racket!! and yes right response!

However, in May a German doctor was handed a six month suspended sentence after landing his paraglider on the site of the nuclear power plant at Bugey in south eastern France.

A French Mirage fighter jet crashed in an uninhabited area during a training exercise on Monday but the two pilots ejected safely, the air force said.

The Mirage 2000B crashed on the border of the Vaucluse and Alpes-de-Haute-Provence regions in the south of France, the air force press service and a source close to the investigation said.

The cause of the accident was not immediately known.

The incident follows another crash of a Mirage 2000 during a training exercise on May 12 in northeastern France. In that case the pilot also ejected safely.

The Mirage 2000 is a multi-role jet fighter and mainstay of the French air force, which has more than 300 deployed. It first flew in the late 1970s and entered service in 1982.