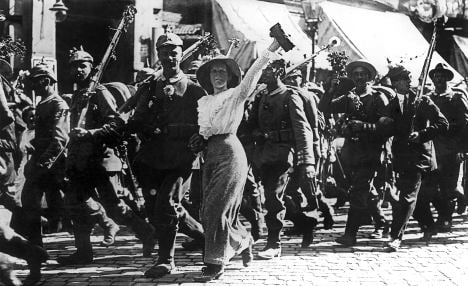 It is past dusk when Wilhelm II uncorks the sparkling wine for his top army brass on August 1st, 1914.

The German emperor has just declared war on Russia, is preparing to attack France, and has received word from his ambassador in London that Britain would remain neutral in the conflict.

Germany had started World War I.

Wilhelm believed the matter would be wrapped up in a few weeks in a blaze of glory, his troops sweeping through vanquished lands.

Four years later, Germany will have lost the conflict, costing it about two million lives and bringing about the end of its empire.

Before the toast, in the early afternoon, the Kaiser had called up his troops in response to a Russian general mobilization ordered on July 30th.

War seemed imminent in Germany, which lived in dread of allies Russia, France and Britain encircling it.

With a look of satisfaction at his military strategists – some weeping tears of joy at the long-awaited arrival of a war for which they had prepared for decades – the emperor put his elegant signature at the bottom of the declaration of war at the Prussian Royal Palace in Berlin, historian C.G. Röhl said.

'No parties, only Germans'

Wilhelm then addressed a cheering crowd gathered outside, below the main palace balcony.

"If our neighbour will not grant us peace, I hope that the German people and the united empire will be victorious, with God's help," Wilhelm said.

"I know no parties anymore, only Germans," added the emperor, a Prussian Protestant, in a call to national unity aimed at the Social Democrats and the independently minded Catholics of the empire.

"Hooray," the masses cried, throwing their hats in the air with glee. The mobilization order threw the German war machine into gear, ready to first of all send soldiers streaming west.

The marching orders prepared over several years had said that in case of war with Russia, its ally France would be invaded first before the German troops headed east.

The strategy in Berlin, known as the Schlieffen Plan, was that it was better to avoid a war on two fronts.

Germany's great rival Britain, it was believed, could be counted on for now to stay out of the European conflict.

But a telegram from Prince Lichnowsky, Germany's ambassador to London, which arrived in Berlin at about 5:00 pm, threw a wrench in the works, Röhl said.

It said that Britain would only remain neutral if Germany attacked Russia alone and not France.

Wilhelm then ordered his army chief Helmuth von Moltke to direct all of his troops toward Russia, drawing a rare protest from the aristocratic officer.

Growing red in the face, according to witnesses, von Moltke argued that changing the strategy at the last moment to plot an eastward advance risked throwing the German military off balance, and warned that France constituted a greater immediate threat than Russia.

A second telegram from Lichnowsky arrived around 8:30 pm: London would probably remain neutral even if Germany invaded France.

Plan A could be maintained; Wilhelm ordered the wine.

Late that evening, however, came another twist in the plot.

England's King George V sent word to Wilhelm, his cousin, that Lichnowsky must have misunderstood: Britain could not stand by and watch France be annihilated.

The die, however, had been cast.

While many in the cities looked forward to a quick defeat of France, those in the countryside preparing the harvest knew that the manpower sent to fight the war would be desperately missed in the fields.

The ensuing war would cause untold suffering for the civilian population as well, with famine raging through the country as two million German soldiers fell on foreign fields.