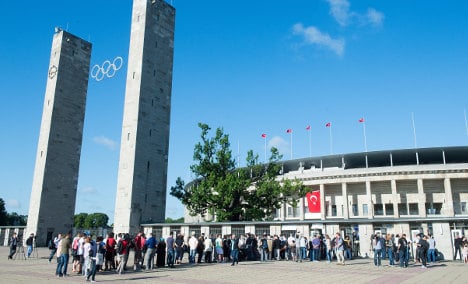 The polls are open. The Turkish flag hangs proudly on the façade of Berlin’s Olympic Stadium. Turkish citizens of all ages pass through the gates – families, the elderly, men and women, some don headscarves, others do not. They’re here to cast their ballots for the next Turkish president.

For most, it’s the first time they’ve ever voted in a Turkish election.

Fatih Temur, 30, has German-Turkish citizenship. He was born and raised in Berlin to Turkish parents who migrated to Berlin in the 1970s.

Temur says it’s important for the Turkish community in Germany to be able to vote because “Turkish politics seem to be more interesting than German politics”.

“We have to take into account that the current government with Erdogan has become very dominant in the last years and some of its measures seem to me very undemocratic,” he says.

Temur mentions the blocking of social media, the violent crackdown against the Gezi protests last summer and topics of gender equality.

For him, these issues are paramount. Yet for his parents, who are voting with him this morning, human rights issues in Turkey take a backseat to a strong economy and solid infrastructure. Many others of this generation feel similar.

Adem Abay, 54, moved to Berlin when he was 15. Even though he lives in Germany, he says he’s still a part of Turkey and wants to use his right to vote as a Turkish citizen. On Thursday, he voted for Erdogan.

“I’m looking at Turkey now, compared to the Turkey that I left,” says Abay. “In the last 15 years, a lot of good changes were made. Erdogan deserves to be president because he contributed to all the progress in Turkey today.”

After 11 years as Prime Minister, Recep Tayyip Erdogan is arguably the most successful leader in Turkey's democratic history. But critics have accused him of harboring a secret agenda to turn Turkey into a more Islamist society.

With his term almost up, he’s running for president. In Turkey, the prime minister can be nominated for the presidency without having to resign from his post.

Under the leadership of Erdogan’s Justice and Development Party (AKP), Turkey has chugged along well economically without with EU.

Yet it’s been nine years since Turkey started down the EU path, and Erdogan has been pushing for talks again with Germany about future membership. Citizens sit on either side of that debate.

Bilgin Ayata is a political scientist with the Center for Transnational Relations, Foreign and Security Policy, at Berlin’s Free University. She told The Local the polarization of Turkish society could be reflected in the Turkish community of Germany too.

Ayata refers to the conservative electorate of the AKP, which currently constitutes the majority in Turkey who, she says, are likely to vote for Erdogan.

Then there’s the fragmented secular opposition. It includes both the former Kemalist elites and far-right Turkish nationalists, who selected as their presidential candidate Ekmeleddin Ihsanoglu, the former leader of the Organization of Islamic Cooperation.

“Lastly, the third group consists of the Kurds who are entering the election with a charismatic and young candidate, Selahattin Demirtas, who has a progressive, inclusive agenda for women's rights, LGTB rights, and minority rights,” explains Ayata.

Out of these three candidates, both Erdogan and Demirtas have come to Germany during the election campaign.

And with close to two million Kurds living in Germany, this could benefit Demirtas, who may get more support in Germany than expected. Ayata says it’s a positive step that immigrants from Turkey can participate at the elections, particularly in Germany, where about half of the immigrant population from Turkey are still excluded from German elections because they are not naturalized yet.

“Germany's restrictive citizenship laws and excluding migrant policies have signaled to the immigrants that their voice and presence is not wanted,” says Ayata, “Hence, the possibility now to vote in the Turkish elections will increase or motivate political participation, which is good.”

Duygu, 32, is most certainly politically inclined. Originally from Eskisehir, she came to Berlin six years ago as a master’s student and is currently writing her PhD.

Duygu is not planning to return to Turkey, but she’s voting anyway. For her, the most important topic is the trans-nationality of rights.

Women are not excluded from this group. Turkish deputy Prime Minister Bulent Arinc ignited harsh criticism on social media platforms when he told women they shouldn’t “laugh in public”.

“I heard about it and laughed out loud,” says Duygu. “When the oppressor aims at our laugh, our laugh turns into a resistance act.”

Bilgin Ayata, too, recognized how the anti-government protests received a lot of interest among young people in Germany with roots to Turkey, who earlier might not have taken an interest in Turkish politics.

Voters abroad make up five percent of the total vote. “This does not look much, but it may be exactly those few percent that the candidates need to achieve their goals," Ayata says.

Given that this is the first time Turks are voting from abroad, the actual turnout of votes may be lower than expected. But in the future, the vote abroad will likely become a critical factor in Turkish elections.

“It’s important for me to somehow influence the elections in Turkey, or at least have the feeling of that,” adds voter Fatih Temur.