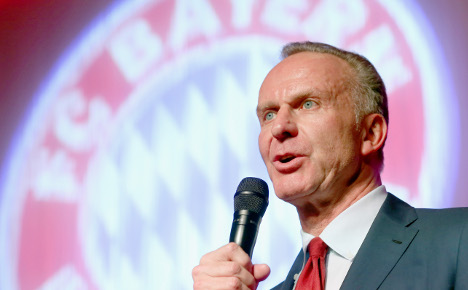 German football legend Rummenigge, 58, was forced to stay at home in Bavaria on Wednesday morning as his team Bayern Munich jetted off on the US tour, designed to crack the American market.

The club said several journalists were also unable to travel with the team, including Bayern Munich’s own TV camera crew.

Six players from Bayern’s U-16 side were also left in Bavaria without a visa.

US visa applications have been plunged into chaos over the past week after the US State Department's central computer system used to process passport and visa requests crashed, causing it to operate at reduced capacity.

Matthias Sammer, director of sport at Bayern Munich, said: “It’s a shame, naturally, but we can’t do anything about it now. I hope he will be able to come later.”

People from all over the world are facing long delays and disruption to their travel plans as the US Bureau of Consular Affairs struggles to get going again.

In the week-long tour designed to raise the club's profile in the US, the players are due to attend the opening of a club shop in New York's Manhattan district on Thursday before flying on to Portland, Oregon for a friendly match against MLS Allstars.

The club is trying to get a foothold in the US market, which has an estimated 60 million football fans, and launched a website for America in mid-July.