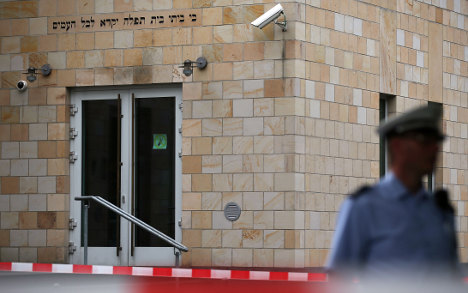 The synagogue on Tuesday after the attack. Photo: DPA

Prosecutors in Wuppertal said they had arrested a 19-year-old from Syria on Wednesday in connection with the Molotov cocktail attack on the city's Bergische synagogue in the early hours of Tuesday morning.

Police believe three young men threw a number of burning bottles into the synagogue entrance-way in an apparent attempt to burn it down.

Officers found broken bottles on the ground at the entrance, but no damage was caused to the building.

Another 18-year-old man arrested shortly afterwards in the area has denied any involvement.

Prosecutors said he told them he was a Palestinian whose pending deportation had been temporarily suspended.

Meanwhile, around 250 people gathered in a peaceful show of solidarity with the Jewish religious community in the city in North Rhine-Westphalia on Tuesday evening, police said.

The head of the Central Council of Muslims in Germany Aiman Mazyek told the Rheinische Post on Wednesday he condemned the attack "in the strongest terms."

"Anyone who attacks places of worship, whether synagogues, churches or mosques is waging war on the rule of law, Germany and against all religions," he told the paper.