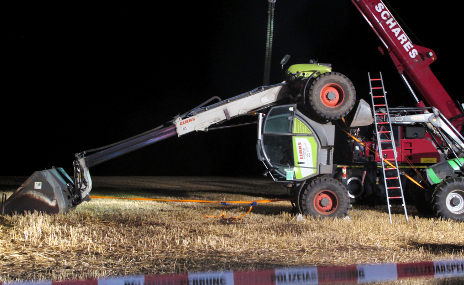 The digger tipped over. Photo: DPA

Police have previously warned about the Facebook craze of cold water challenges where participants record themselves diving into lakes or being soaked in icy water.

On Tuesday night, the craze cost a group of friends from Isselburg, North Rhine-Westphalia dearly. One man was killed and another five injured in the incident.

The 34-year-old had been drinking with 13 friends from his local bowling club in a freshly-cut corn field when, at around 8.15 pm, one suggested he use his digger to soak the group with cold water.

The digger-owner filled the mechanical shovel of with 2,000 litres of water and slowly drove it up to his friends, who were sitting around a table in the field.

He rose the shovel to six feet in the air to pour the water on top of them, but the digger then lost balance and fell forward. The metal shovel struck the table, hitting six members of the Isselburg Bowling Club aged between 32 and 36, police said in a statement.

Five were seriously injured and the 34-year-old father died.

A 19-year-old man drowned in Brittany, France, in June, while taking part in a Cold Water Challenge.