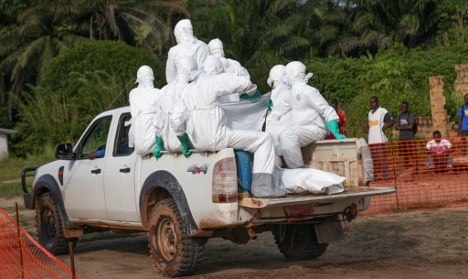 The infectious Ebola virus has killed 672 people in Liberia, Sierra Leone and Guinea since February in the world's largest ever recorded outbreak of the disease.

The World Health Organisation (WHO) is struggling to gain control of the virus for which there is no vaccine and no cure.

Now, a Sierra Leone national who was infected while trying to help stem the spread of Ebola across West Africa may be sent to the northern German city of Hamburg for treatment.

"We've activated the epidemic unit and have explained in consultation with all relevant authorities and public institution our willingness in principle to accept and treat the patient."

If the man was to come, he would be the first patient known to be infected with Ebola ever to set foot on German soil, according to the Bernhard-Nocht Institute for Tropical Medicine. The patient is still in Sierra Leone.

Some reports suggest the unnamed man could be Sheik Umar Khan, an expert on Ebola and veteran fighter against the disease who was recently infected with it.

Hamburg health authorities echoed reassuring statements from the UKE emphasizing the high level of security precautions currently being made for the eventuality and that it posed no cause for alarm among clinic employees or the public.

"It's highly questionable whether this patient comes at all," said Rico Schmidt, spokesman for the Hamburg health authority. The man would first have to be declared fit to travel.

The virus, which causes fever and heavy external and internal bleeding, is among the most deadly in the world. Infected people have a 50-80 percent chance of death, with survival chances improving the earlier they receive treatment.