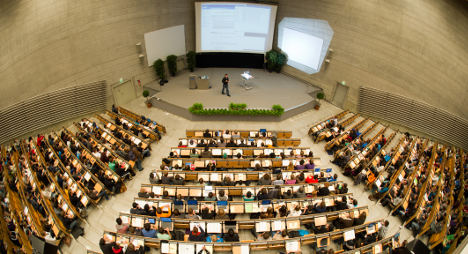 Munich's Technical University (TU), one of the highest ranked in Germany, already uses English in 30 of its 99 master's courses. Now the board of trustees has followed a recommendation by the university's president, Wolfgang Herrmann, to switch to English for most other master's modules by 2020.

"English is the lingua franca in academia and of the economy," Herrmann told the Süddeutsche Zeitung on Wednesday. He said it was important to prepare students for a professional life in which they would be expected to speak English.

Herrmann also said he wanted to send a "strong signal" that would allow TU to compete for the brightest master's students globally.

A spokesman for the university told The Local the TU did not have a target for the number of modules it would offer in English. He added the plans were based on demands from students.

"We want to expand our offers in English. This will not affect all modules," the spokesman said.

The university declined to give further details.

But Sebastian Biermann, chair of TU's student parliament, disputed that students had called for English across the board.

While Biermann said student representatives were open to more English, "generally switching all master's degrees to English is something we view rather critically".

Biermann said the reform made sense for some departments like computer sciences, where English is already common. It was not the right solution for courses like constructional engineering, he said, where textbooks and legal requirements were mostly in German.

Switching TU master's programmes to English also requires fluency among academic and administrative staff and more language support for students. Biermann said students doubted this could be achieved by 2020.

And Johannes Singhammer, a Munich lawmaker who serves as deputy speaker of the German parliament for the Christian Social Union (CSU), asked the university to reconsider its decision.

"It would be the wrong signal to send if the impression was given that German was no longer suitable for technical studies and ready to be discarded on the scrapheap of former high-level languages," Singhammer wrote to Herrmann

Singhammer warned German should not be "dwarfed” until it was no longer an academic language.

"Abandoning German as an academic language poses the risk of economic disadvantages," Singhammer added. "Businesses again and again point to the relationship between knowledge of the German language and the purchase of German products."

Singhammer said the university was making it harder to promote the academic use of German, something the German Parliament said last year it wanted to do.

‘Publish in English or perish in German’

Last month, humanities and social sciences scholars from more than 60 universities gathered in Siegen, North Rhine-Westphalia, to debate the declining importance of the German language in their field.

Among the issues they discussed was the idea that professors had to "publish in English or perish in German”.

And a 2010 study by higher education think-tank, the HIS Institute, found that for German academics, English-speaking publications were "often the only way to be noticed by the international scientific community".

SEE ALSO: 'Denglisch is for losers – it has to stop'