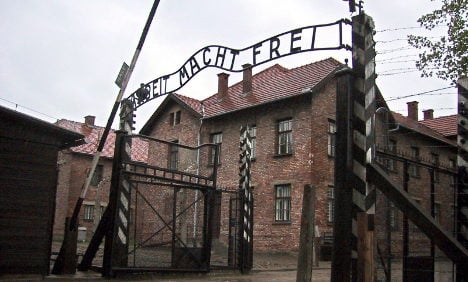 Johann Breyer, a retired machinist born in Czechoslovakia, admitted joining the Waffen SS at the age of 17 but denied being a guard at Auschwitz, the concentration camp in German-occupied Poland.

"I can confirm he passed away last night," said his lawyer Dennis Boyle.

Breyer died after being transferred from prison to hospital when the court ordered his release on Monday due to his declining health, which had deteriorated while in custody, Boyle said.

News of his death emerged as the court on Wednesday ordered that he be extradited to Germany to stand trial.

Breyer was arrested in Philadelphia in June on a warrant from the German government.

He was accused of being an accessory in the killings of hundreds of thousands of Jews in 1944 as an Auschwitz guard.

Breyer insisted he was only in a field artillery unit of the Waffen SS and deserted weeks later after serving in the vicinity of Auschwitz, but not as a prison guard.

He also spent time in a Russian prisoner-of-war camp at the end of World War II.

Magistrate Timothy Rice denied Breyer bail when he first appeared in court in June due to the severity of the charges.

Boyle said last month that his client was in poor health, suffering from dementia and heart problems, and had already had a couple of strokes.

Born to a US mother, Breyer emigrated to the United States after World War II and is married with children and grandchildren.

The US government tried to revoke his citizenship over the allegations in the 1990s, but took no action after it was determined at trial he did not serve voluntarily, Boyle said.

But in 2011 a Munich court sentenced another US immigrant to five years in prison for more than 27,000 counts of accessory to murder, establishing that all former camp guards can be tried.

Auschwitz is an enduring symbol of Nazi Germany's genocide of six million European Jews, of whom one million were killed there from 1940 to 1945.