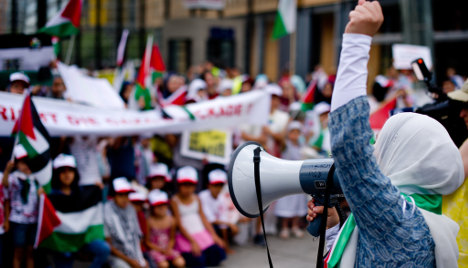 A pro-Palestine demonstration in Berlin on Tuesday. Photo: DPA

"We cannot and should not let this go," Frankfurt city councillor and head of the local CDU faction Uwe Becker said in comments reported on Wednesday by the Frankfurter Allgemeine newspaper.

The CDU has now filed formal complaints of anti-Semitism and incitement of the people against participants in a rally on Friday who led anti-Israeli chants, Becker said.

The head of the FDP Liberal Party faction in the Hesse parliament also demanded that the state's interior minister, Peter Beuth, take action against protesters in Frankfurt who overstepped legal bounds of freedom of expression.

"Regardless of all strategies to de-escalate the situation, do not allow slogans of incitement that hark back to the darkest hours of our history to echo in Hesse," the deputy head of Frankfurt's FDP branch, Wolfgang Greilich, wrote to the minister.

"The chancellor and the entire German government condemn the anti-Semitic remarks made at pro-Palestinian and anti-Israeli demonstrations in Germany in the strongest terms," Georg Streiter told reporters.

"These outbursts are an attack on freedom and tolerance and an attempt to shake the foundations of our free and democratic system. We cannot and will not tolerate this," said Streiter, adding that any violence against Jewish people or institutions would be prosecuted to the full extent of the law.

In Berlin, prosecutors began legal proceedings on Thursday against Danish citizen Abu Bilal Ismail, an imam from a mosque in Copenhagen, who prayed for the death of Jews during a speech at a mosque in the Neukölln district last week.

CDU parliamentarian Burkard Dregger filed a complaint of incitement against Ismail with the city police. "Such people who call for violence are not welcome in our country," the politician told the Berliner Zeitung.

The mayor of Neukölln, Heinz Buschkowsky, said there was only one adequate response to the actions of the imam: "[Send him] back across the border with a ban on re-entering the country," he said.

In a video posted online, Ismail is seen imploring, “Oh Allah, destroy the Zionist Jews … Count them and kill them to the very last one. Don’t spare a single one of them."

Despite the taped comments, he later insisted he was referring only to "Jews who have killed people in Gaza."

In street demonstrations in Berlin, crowds of pro-Palestinian protesters also shouted "Death to Israel" and "Zionists are fascists, killing children and civilians".

Anti-Semitic slogans are illegal in Germany, where atonement for the Nazi killing of some six million European Jews in the Holocaust is a cornerstone of the post-war order.

The calls for action were echoed by a senior police officer and professor of law who oversees the police in three of the city's districts.
'Police must respond'
"The police must take action," Michael Knape told the Tagesspiegel newspaper, adding that the slogans shouted were "right on the border of incitement".
Public safety was a "central guarantor of the right to assembly", and since the conduct of the protesters had caused fear among people, legal action was justified. But Knape denied that police in the capital had been lax in enforcing the law during the protests.
In a telephone conversation with German President Joachim Gauck, the leader of the country's Jewish community, Dieter Graumann, said he had discussed events of recent days and the fear they had created.

"Many members of our community are very shaken, worried and absolutely shocked by the worst anti-Jewish slogans that some out-of-control crowds have shouted, calling for Jews to be 'gassed', 'burned' and 'slaughtered'," Graumann said in a statement after the call. Gauck told him he took Jewish fears "very seriously". In Mainz, ex-parliamentarian and former head of the German-Israeli Society, Johannes Gerster, filed charges against the leader of a demonstration on Friday at which participants chanted inflammatory slogans.

The actions of the 1,500 mainly Palestinian demonstrators exceeded legally permissible bounds, said Gerster, who is a lawyer.

The leader of the protest, Fatih Bayram, had "whipped up hatred and called for violence and arbitrary actions against Israel and Jews in Germany, and thereby disturbed the peace in our country," he told the Allgemeine Zeitung.