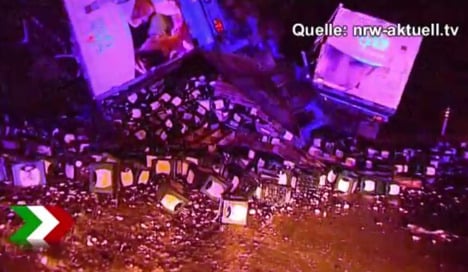 The truck was on the A40 motorway heading towards Dortmund and was approaching the A3 motorway towards Arnheim at the Kaiserberg interchange.

The 66-year-old driver then lost control of the vehicle and slid off the road. Hundreds of bottles were spilled across the road and the grass verge.

Police cleared the motorway in the early hours of Tuesday but waited until after the morning rush hour before recovering the truck.

Access to the A3 motorway was blocked between 11am and 2pm, a police spokesman told The Local.

The driver was uninjured.